Ron Colangelo’s office window at Comerica Park is lined with bobbleheads of Detroit Tigers. As the Major League Baseball team’s vice president of communications, Colangelo’s staff hypes games where bobbleheads, rally caps and other souvenirs are given away. 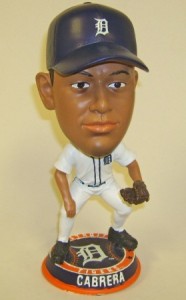 There aren’t giveaways for all 81 home games in a season, but Colangelo makes sure every game is unique because of a celebrity throwing out the first pitch, a raffle to raise cash for a worthy cause, fireworks, something.

“It’s more than creating good will in the community,” Colangelo said, demonstrating how he keeps track of promotions on a large erasable wall calendar in his office. “It’s fun. So much fun.”

Truth be told, it’s not all fun. Home games represent a 14-hour work day. Colangelo’s season starts long before players head to Florida for spring training by organizing “winter caravan” media stops. Occasionally a player gets in trouble and he has to quickly gather as much information as he can and decide – together with General Manager Dave Dombrowski – how to field media inquiries as transparently as possible.

Nevertheless, a job in public relations is special because it allows one to become a “keeper of the brand,” said Colangelo, who held similar positions with the Florida Marlins and New York Jets before joining the Tigers in 2008. 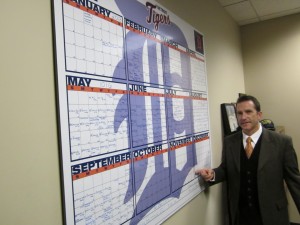 Ron Colangelo and his planning board.

The Detroit Tigers is a venerable brand that is revered by people with Michigan roots. The team is the oldest continuous one-name, one-city franchise in the American League. Its roots date back to 1894. The Tigers have won the AL pennant 10 times and the World Series four times.

I spoke with Colangelo in the waning days of the 2012 regular season, when the Tigers were trying to overtake the Chicago Whitesox for a Central Division title and a right to advance to postseason play.

In the throes of a 162-game season, it would be difficult for members of a large sports organization to “stay on the same page” without regular business communications meetings, Colangelo said.

Strong internal communications are the backbone of good public relations

Representatives from each department at Comerica – ticket-takers to broadcasters — send at least one representative to Colangelo’s business communications meeting, usually held two or three days before the start of a new home stand.

Colangelo briefs staff about what’s coming up and synthesizes it into an over-arching talking point. With staff on board, Colangelo then provides a tip sheet to media outlets, hoping they’ll spot content they want to cover. (News-gathering organizations have unlimited real estate online so there’s more opportunity than before to “really push the brand out there” with personal interest stories with multiple photos, Colangelo said.) 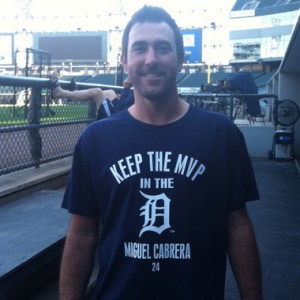 “Our themes for this home stand were ‘every game counts’ and ‘3 million’ fans,” Colangelo said. “But Justin Verlander had a better idea.”

The Tigers’ ace hurler, who won the American League’s Most Valuable Player and Cy Young (top pitcher) in 2011, tweeted a photo of himself in mid-September wearing a T-shirt he custom-designed to read “Keep the MVP in the D. Miguel Cabrera 24.” Cabrera, a teammate, came on strong in August to lead the league in several offensive categories.

Colangelo and staff seized the moment, placing a rush order of “Miguel Cabrera for MVP” t-shirts for the DTE Energy Crew, who dance between innings at every game on the Tiger dugout.

Colangelo said he sent text messages to a few members of the media with clout suggesting they talk up Cabrera for MVP. “Cultivating and leveraging relationships is part of being a good communicator,” Colangelo said.

Staying on top of the scrutiny

“You’d be hard-pressed to find an entity other than the White House that has more media scrutiny,” Colangelo said. “ Our manager and players are available to the media before and after 30 spring training games and 162 regular season games. Nobody gives that much access.”

The advent of the Internet, email and social networking is revolutionizing the way pro sports teams communicate, said Colangelo, who broke in with the West Palm Beach Expos in 1990.

While most fans still follow team news on eight TV and newspaper outlets that cover the Tigers daily, new technology has spawned additional outlets that feed on a 24/7schedule. The Tigers have been active on social media since 2009. 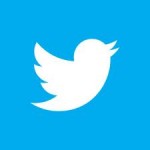 “Fans love that we tweet the lineup, roster changes, milestones,” Colangelo said. “You imagine somebody checking his phone during a meeting and being among the first to find out Cabrera just hit his 300th (career home run).”

The Tigers monitor everything said about the team, but rarely respond to stories except to correct a factual error they don’t want perpetuated.

“If a comment is vicious or too personal, I’ll pick up the phone,” Colangelo said. “Otherwise, engaging back tends not to be worth it. Fans are passionate about this team and, if things are not going so well, you see that reflected in social media.”

Colangelo said can only imagine what it will be like communicating with fans in the future. His two-year-old son son squeals “Detroit Tigers” whenever he sees an Old English D. The tot can also independently operate an iPad.

“Leaves you wondering when should you start marketing to somebody,” Colangelo said.

Colangelo sees many opportunities for Major League Baseball players to use their celebrity as a springboard for helping teachers deliver curriculum, although the baseball schedule permits little free time during the playing season and few players make their winter homes in Michigan.

“My 12-year-old son would not be able to identify Canadian provinces, and probably some American cities, on a map of North America if he didn’t want to know where my job was taking me,” said Colangelo, who’s also done work with the National Hockey League. “I know good teachers use a kids’ interest in a sports team to teach them geography, statistics, and other things they need to know. School communicators can highlight this for parents.” 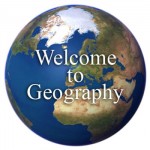 Students may be more interested in learning about South America if part of the lesson was delivered by Cabrera, Omar Infante, Magglio Ordonez, or Carlos Guillen (from Venezuela), Jose Valverde or Jhonny Peralta (Dominican Republic).

“It might take appointing someone in the state Department of Education to reach out to pro sports teams for help in encouraging learning, but I think the interest is there,” Colangelo said.

Another tip for educators: Special moments abound. Feature them.

Colangelo said his favorite part of the job is being able to make special moments for fans. Sending a birthday card signed by Willie Horton. Arranging for Al Kaline to greet a woman attending a game to celebrate her 90th birthday. Getting Tiger announcers to give a shout out to a longtime fan listening at home.

One of those “sacred” moments came in September 2009 when legendary Tiger announcer Ernie Harwell, terminally ill, arranged to walk onto the field between innings to say goodbye to Tiger fans. Colangelo was his escort to the field.

“Ernie hadn’t prepared remarks, he just spoke from the heart,” Colangelo said. “Walking back, he asked me how I thought it went and I told him it was perfect.”

Even better than Colangelo could have planned.