Well, what do you know?

Remember, he was the one who said –

“It is a good rule after reading a new book, never to allow yourself another new one till you have read an old one in between.”

And after following his advice over the weekend –

I’ve actually got a useful tip on messaging to pass along your way.

After completing a book on Navy Seals training a few days ago (published 2016), I tackled this 32 year-old gem by communications expert Milo O. Frank.

(Tackled probably overstates the effort required, however… there’s only 116 pages.) 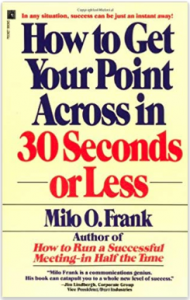 On page 59. Frank added a unique point about “messaging” I had never considered before.

Like you, I’ve heard a zillion times that there are essentially two things you must know well whenever you are composing a message.

#1  You need to know your audience.

#2  You need to be clear about what you’re going to ask them to do.

Nowadays, we’ll even hear #2 dressed up a bit – where it’s described as a CTA, a Call-to-Action.

Gotta have both of ’em.
Don’t we know it!

Of course, Frank totally agrees with this, but he injects a third component.

He said frequently – based on what you know or don’t know about your intended audience – it’s often wise to punt on a direct Call-to-Action, and instead, try to spark a REACTION (an emotion of some kind).

Doing so should make your eventual Call-to-Action all the more compelling.

Here’s my interpretation of what Frank meant:

That intended audiences are becoming immune to the strident messages of Buy Now, Enroll Today, Stop In and similar hard-sell pitches.

That by aiming for their hearts first – rather than by quickly going for their wallets or their signatures on a dotted line – we create messages that achieve better results over the long haul.

Those messages could look like these:
• Imaging the fun of taking your family to the fall musical.
• Work alongside new friends in the athletic boosters’ concession stand.
•  Do you know how proud your child is to see you in the audience?

Anything reaches out with authentic emotion from the get-go.

Frank says that after igniting an intentional reaction,  you can then spell out what should be a more effective Call-to-Action… as then, people will be more eager to hear it.

It was Frank’s “reaction” angle I had never fully thought about before.

But the REACTION first,
CALL-TO-ACTION second
approach has a certain logic behind it.

Now I know what you’re thinking right about now, too.

You no doubt have high hopes I’ll take the title of this book seriously and learn to get my points across in 30 seconds or less.

But that’s not about to happen anytime soon.

I’m not that good a writer!

Posted in The Encourager and tagged Messaging