The word “guru” gets tossed around a lot lately. But communications guru Ron Koehler earned this distinction a unique way. He actually earned it.

After leaving former Michigan Governor Jim Blanchard’s communications office more than 30 years ago, Ron settled into the Grand Rapids area and never looked back. He’s worked for several progressive cutting-edge superintendents, coordinated message development and overall media campaigns for a number of education-issue elections, and built strong relationships with other educators and school PR professionals all along the way.

Ron’s passion for the role of school communicators extends to others in the field. He has been the past president of both NSPRA and MSPRA (MI), and is still active in both groups. While he is now the Assistant Superintendent for Organizational and Community Initiatives for the Kent Intermediate School District (Kent County, Grand Rapids), there is no let up in his commitment to PreK-12 education. You want a fiery and upfront speaker? A speaker who will laugh with you? Then book Ron. It’s no wonder the Michigan Association of School Administrators (MASA) recently asked Ron to present his tips on media relations to a group of 60 brand new superintendents at its 2012 statewide gathering.

OK. A quick profile about Ron has now been established. He’s a respected leader and friend for hundreds of school communicators (true!) — and honestly, if Ron only drank “Dos Equis” beer, he might even unseat that guy we see in the TV commercial as the most admired man around (somewhat true!).

Ron can take the heat 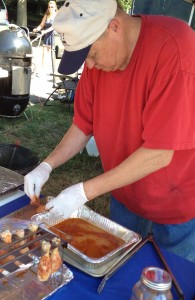 Moments like these are not a good time for chit-chat.

Granted, Ron’s wife Jeannie is able to assist Ron’s four- person grilling team in a big way and she travels to the competitions with him, so that is some consolation. But make no mistake, when you’re heading off to the 33rd Annual American Royal World Series of Barbecue Invitational in Kansas City, there’s plenty of pressure. Like baseball’s World Series, this event is in October. And like the baseball classic, competitors had to qualify to get in.

When I found out about Ron’s grilling skills this summer, I leveraged much of my school communicator credentials (taking advantage of Ron’s good nature) to get permission to hang around his team for the weekend at the Taste of Grand Rapids, one of the smaller qualifying competitions that take place across the country prior to Kansas City BBQ Society’s American Royal.

It was an amazing experience. On a strictly timed competitive schedule lasting about 40 hours, Ron’s BBQ team and about 30 other grilling teams gave it their best shots preparing a variety of mouth-watering entries: potatoes, vegetables, dessert, chicken, brisket, and (oh yeah) pork ribs.

One second late means your out 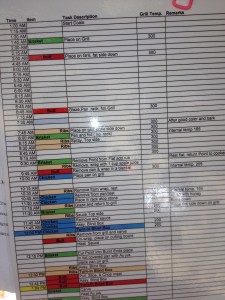 It’s a long task list; 9 pm, 1 am, 6 am, and noon. But it’s what separates the competitive BBQ teams from the tailgating burger-flippers.

Sound like fun? There’s minimal sleep. The clock is ticking. There are spies all around. The tasting judges are strict. Your investment in equipment and product is significant. And your team’s performance must be at its peak. Turning in one item just one second late to the judging tent is cause for an immediate disqualification.

“There’s pressure, for sure,” Ron said. “You’ve got one chance to make a good first impression with the judges because typically they only take one bite before recording their score.” (First impressions … the all too quick judging from others … hmmm, I think school communicators know about these concepts, too.) 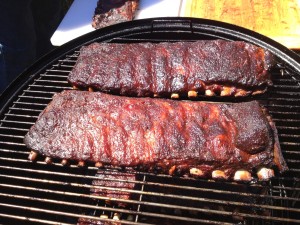 As the final judging neared toward the end of the event, Ron continued to be the school communicator, ever the diplomat. I would have done so as well – but I was too busy eating his team’s wonderful samples and licking my fingers. Since I couldn’t hold my pen and pad and feed my face at the time, I’m reciting these words from Ron from memory.

“Win or lose, driving home at the end of the day from a BBQ competition this is very much like driving home at the end of a school day. It’s a good time for reflection. I’m fortunate to be a part of a great BBQ team and also be a part of a great school team. I enjoy both. They’re similar in many ways. Everyone all around you works very hard to achieve an excellent result, but for whatever reason – and many times for things out of your control – the final result you are hoping for is occasionally not the one you get. So you learn, make adjustments, and move on. The standardized testing and school report card process are sometimes like those BBQ judges. They may not always be on your side. But usually your hard work pays off. In BBQ you begin with raw materials. In school you begin with young minds. In in each domain we work with the great potential put in our care. We take pride in doing our best, trophies or not.”

Well said, Ron. Good luck to you and your BBQ team in Kansas City.
Bring back some more samples!