As a kid growing up in mid-Michigan, I thought Bronner was one of the reindeer that pulled Santa’s sleigh when he delivers presents. I suppose I was confusing the name with “Donder” from the Clement C. Moore poem “ ‘Twas the Night Before Christmas.”

But I wasn’t entirely off base. 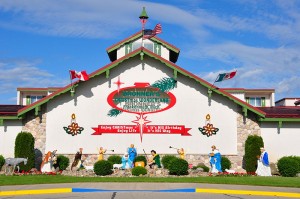 In Michigan, the Midwest and beyond, it is Bronner’s that delivers the trappings of Christmas joy to homes, cities and businesses.

Bronner’s CHRISTmas Wonderland (founder Wally Bronner, a devout Lutheran, stipulated that Christ be emphasized in the name) bills itself as the world’s largest Christmas store. Walk in 361 days a year and it’s going to look and sound like Christmas.

I can’t imagine another establishment challenging Bronner’s claim to yuletide magnificence.  Where else could offer you a selection of more than eight Santa thrones?

If all you saw was Bronner’s $900-per-day electric bill, you could be sure that the place glows Christmas inside and out. This chalet on steroids sprawls over seven acres (about the size of 1.5 football fields), yet it feels kinda cozy because like products are grouped into numbered sections that are identified by signs suspended from the ceiling.

I’ve seen billboards for Bronner’s in travels in most states east of the Mississippi. The advertising must work. Bronner’s is situated in Frankenmuth — “Michigan’s Little Bavaria” — which has fewer than 5,000 residents, yet the store attracts more than 2 million visitors annually.

Learning from a display giant 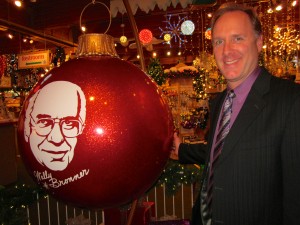 Kevin Maurer with gigantic bauble with Wally Bronner’s image painted on it.

Since it’s Christmastime, and Bronner’s is Christmas kitsch at it’s biggest and finest, I made an appointment to speak with Kevin Maurer, who designs Bronner’s interior commercial displays. Kevin, a father of six, is also a trustee on the Frankenmuth school board. You’ll see his decorative Christmas and Easter displays in shopping malls, casinos, hotels and municipal properties all over the U.S. and in Canada. He’s excited about his new Santa display that debuted this season at a shopping mall in Edmonton, Alberta.

I asked Kevin to share some tips that school communicators could use to create more attractive displays.

Maurer, who’s been with Bronner’s 35 years, began with the disclaimer that he studied business, not art, in college. He confessed that he might feel under-prepared for the job if Wally Bronner himself had not given him years of excellent on-the-job training.

“Mr. Bronner added Christmas decorations to his existing sign painting business,” Kevin said. “It was obvious to those of us who worked with him that he was a natural. He had a knack for good design.”

Here are the essentials:

Kevin said he also learned some Christmas-specific skills from Bronner that have served him on the job and at home. (It takes 30 large plastic tubs to store he and his wife’s Christmas decorations. Animated figures aren’t just for work, you know!)

These skills include how to light a Christmas tree (from the bottom up, peeps) wrapping the electrical cord around each branch instead of draping them across several, and how to wrap a gift, using only enough paper to cover the present.

While many of the commercial displays Kevin designs cost upward of $150,000, he takes pride in the fact that Bronner’s refurbishes 17-foot Santas, 15-foot snowmen and other large decorations to help customers make them last decades.

Kevin also helps customers afford a Christmas makeovers. He links potential buyers of gently used decorations with owners who want to switch up the holiday décor to keep their holiday appearance fresh. Case in point: The very same decorations he originally sold to Lansing Mall were subsequently purchased by Birchwood Mall in Port Huron, and then by a shopping mall in Odessa, Texas.

While Bronner’s has more than 50,000 types of yuletide trappings it can sell you, Kevin said it doesn’t have to cost a mint to create a festive effect. Using shiny paper to wrap  framed wall art and empty boxes like presents is an inexpensive way to be festive, he said. Adding bows or changing the color of bows is another inexpensive way to redecorate, he said.

But Kevin’s favorite low-cost way of celebrating the season — or any special event — is giving personalized ornaments. “Penning” is  the occupation of 36 people (most of them part-time) who work on Bronner’s cavernous retail floor. In addition, 25 penners are employed to personalize orders that come in over the internet. 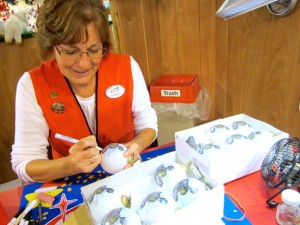 Remembering my days as a cake decorator, when a customer asked me to write The Lord’s Prayer on confirmation cupcakes, I stopped to ask penner Karen Lynch how often she is asked to write unusual things on Christmas ornaments.

“Just a lot of uncommon name spellings,” she answered. “There are a lot of unique names out there.”

To my surprise, Karen said she has personalized an ornament for a La–a (pronounced Ladasha), probably the most unusual first name I stumbled over in my newswriting career.

As Karen wrote names on boxes of train ornaments for some Connecticut organization, she told me how she always looks forwards to trimming her tree at home with a personalized bauble given to she and her groom at their wedding in 1975 — decades before she ever came to work at Bronner’s.

“It’s nice to make something that you know will be treasured, even though it doesn’t cost a lot,” Karen said.

When more is more 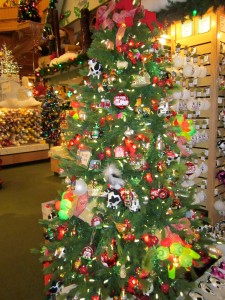 Look closely and you’ll see why I say you can get any kind of ornament at Bronner’s.

In closing, I must warn you that If you can’t find gift ornament that matches a friend or loved one’s special interest, you’ll probably have to make it yourself.

I’ve searched Christmas departments for years looking for an ornament of a Shetland Sheep Dog painted with markings similar to my dog, Willow. Found it in six minutes at Bronner’s.

There’s a huge section of pet ornaments, and sports ornaments, and alien ornaments, and vegetable ornaments. In short, there’s a long list of stuff you never considered dangling from a Christmas tree that actually looks pretty good. I don’t know who buys some of this stuff but business is booming, especially at this time of year.

Kevin said 2009, the apparent trough of the recession, was the worst for sales in 45 years. But commercial customers are replacing or refreshing their Christmas decorations again. He says 2012 will easily be Bronner’s best of the last six.