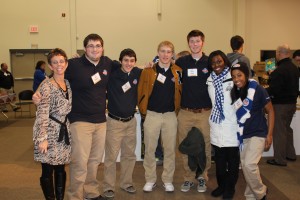 How did she work that magic?

That’s what school communicators asked after reading my Super Bowl story on Dianna Boyce, who headed up communications for the Indianapolis host committee.

To set the tone for Hoosier Hospitality right from the get go, Dianna said the host committee decided to have eighth graders – who would be seniors when the event would take place if all went well – deliver Indianapolis’s bid to all 32 NFL team owners.

Just imagine a meeting where someone tosses out the idea of having eighth graders visit every team owner in person to pitch the benefits of bringing the Super Bowl to your community. Imagine also that this idea had to be acted upon with less than two weeks before the bids were due to the owners and you had absolutely no protocols for organizing out of town travel for minors. Forget it.

But this was the playbook that Dianna had 12 days to pull together. 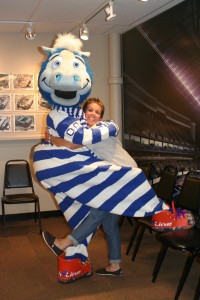 surround it. “We decided to leave most of the selection criteria up to the school districts,” Dianna said. “All we asked for was an eighth grader who would represent them and us well.”

Viewing Indianapolis and its suburbs as a large donut, Dianna then extended the invitation outward to superintendents of large districts until she eventually landed her 32 ambassadors. While most students lived in metro Indianapolis, one came from as far away at Terre Haute, a good 75 minutes from the city.

The email invitation campaign had its glitches. Email filters sent some of Dianna’s initial notes straight to Spam, so follow-up calls were important to assure that the message was received, she said.

In the end, no district that was asked refused to participate, Dianna said.

A 32 member team of 8th graders is formed.

Some school districts appointed a top student athlete as their representative, while others had students write short essays. Although the ambassadors were mostly boys, Dianna said she was glad several girls were appointed without her having to step in and make gender part of the selection criteria.

The Sunday before bids were due, Dianna gathered all 32 newly appointed ambassadors to the Indianapolis Colts training facility for a “draft” Every student chose a number out of a helmet as they came in the door. The student with the lowest number got to pick first from a long table that held 32 identical gift bags. Each gift bag contained a jersey from a different NFL team, which signaled which bid that student would be delivering.

“Our goal was for the students to hand-deliver bids on the Friday they were due and have the most fun possible doing it,” Dianna said.

Is this cool or what? (But the work is only beginning.)

She’ll tell you that she didn’t sleep much during this time frame. 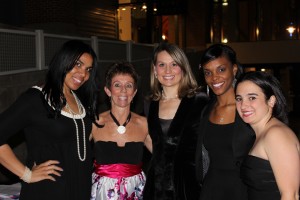 Dianna Boyce and some communications liaisons.

Northwest Airlines helped make this strategy possible by providing complimentary flights to the students and their school chaperone as they fanned out to deliver the bids. (In a few cases, students traveled with a parent instead.) Only the West Coast deliveries required an overnight stay.

All student ambassadors (even “Katie” delivering to the hometown team, the Indianapolis Colts, more on that later) gathered that Friday morning (May 8, 2008) at the Indianapolis airport in front of a big leader board marked like a football field. (Which has now been retired to Dianna’s basement.)

On offense. Moving the ball forward.

As the 8th grader/chaperone delivery teams reached their respective cities, Dianna lined up ground transportation, usually by private car. At this point the every NFL team owner was waiting for their Indianapolis packets in their offices. There were no home deliveries.

In some instances the delivery was made to another member of the administrative team because the owner could not be available but Dianna said every team made the deliveries special for the students. The eighth graders were given tours of the facilities, had their photos taken with any players who on site, and were usually sent home with multiple team jerseys and other souvenirs.

There always one in every crowd.

There was one team where not much more than a front office delivery could be arranged, but Dianna wouldn’t name the team. She took responsibility for the dud, saying that she had failed to reach a person in that organization who could understand the tone the host committee was trying to establish with the personal deliveries by Indy 8th graders.

“Except for this one instance, teams made it very special experience for the student ambassadors, even for our student who got Indianapolis in the draft and didn’t even leave town,” Dianna said.

Still given the royal treatment

That student, Katie, got to take a limousine with a her friend and the chaperone from school to the Indianapolis Colts training facility, where she delivered the bid and got to meet and take pictures with her favorite player, Adam Vinatieri, whose four Super Bowl rings are the most of any place kicker in professional football history. 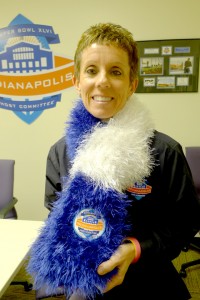 The eighth grade ambassadors traveled to the team owners in 2008. The Super Bowl in Indianapolis was played in 2012.

The student ambassadors weren’t “retired” after the bids were delivered. Dianna said they returned periodically over the next few years to participate in various Super Bowl community service and charity events that had an education connection.

“Some lasting friendships were made,” Dianna said. “It was a lot of effort in a short amount time, but it was so worth it. The playbook we used set the right stage for everything that came afterward.”