There’s a “when opportunity knocks” factor with Influencer Marketing 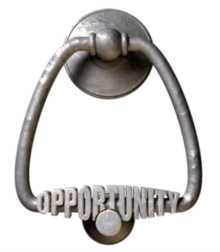 You’ve got to be aware.

You’ve got to be gutsy.

You’ve got to move quickly.

Three things I don’t do well, dang it.
(Which – by the way – isn’t my fault. How could I hone these skills when my wife and daughters kept me in “last to know” status at home for years?)

But as we continue to see the power of celebrity attraction grow, influencer marketing is a gigantic wave we should consider riding.

In the battle to snag attention and eyeballs, associating with a celebrity works wonders.

He or she can open school PR doors you’re only able to knock on.

Take, for example, my recent encounter with Ronald McDonald. 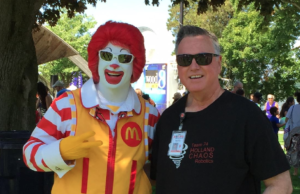 I met him last week at a big event for children in a local park.

There were a number of event-jackers on the scene and I was there with a district team passing out basic back-to-school information.

As you’re probably aware, Ronald McDonald tests out with higher recognition with kids than Santa Claus.

It took some speedy-kwik maneuvering but I was able to get a photo with him.
(And no, I didn’t cut in line. I took my turn with the rest of the kids.)

When I emailed out the photo of Ronald and me on Friday, the positive and fun comments were off the charts.

I was riding high…
until I saw the tweet Ronald sent out later in the day.

“Hey McDonald’s nation! Look at this clown who pestered me for a photo!”

But good vibes were still on my side.

The next day my family and I went out to celebrate a family member’s birthday. 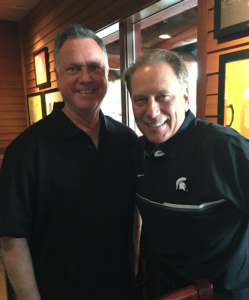 We were at a popular restaurant in Grand Rapids (MI) and spotted another well-known celebrity sitting just a few tables away.

I got off my butt and obtained a photo with the great MSU basketball coach Tom Izzo.

He couldn’t have been more friendly and gracious.

But as with Ronald, I failed to follow-up and ask if Coach Izzo would extend his influence in some way to promote my school district.

This is the very next step in Influencer Marketing – securing assistance – and it requires quick-thinking and creative diplomacy.

And I totally botched it.

After I sat back down at my own table, I contemplated returning to Coach Izzo to see he’d leverage his incredible influence and team up with me in some way.

But then I saw his tweet on my phone.

“Hey Spartan nation! Look at this clown who pestered me for a photo!” 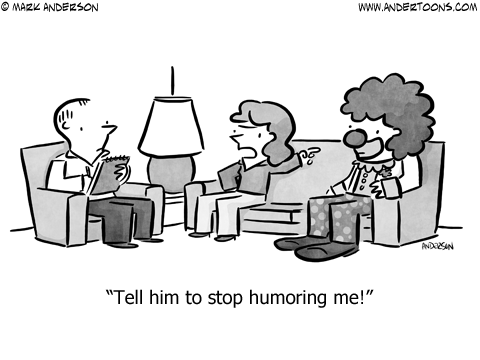