The tech integration specialist and three tech support technicians at our high school needed some extra helpers. With more than 1200 students turning in their school-provided iPads before the summer break, they wanted a few more mature and knowledgeable adults to work alongside them for two days.

So they issued an “all call for volunteers” via our staff email.

Since I’ve never been asked to assist with anything tech related – ever – I signed up.

I was immediately impressed by how the tech specialist and his team respected and admired what I do as our district’s school communications director.

In fact, they asked me to not show up. They said that someone in “my position” shouldn’t have to help at checking-in student iPads; that there had to be more important districtwide projects for me to be working on. (Somewhere. Anywhere.)

But I told them I’d honor my commitment. “While I’m flattered, you’re over-estimating the essential role I play in our district’s operations,” I said humbly. “I’m yours for both days.”

Within the hour, they sent out another email “call for help.” This time the word “urgent” was in the subject line.

People must’ve taken them seriously because when I arrived days later to offer my “two days of extensive tech support” – I saw that they had numerous volunteers and every station was already manned.

The tech integration specialist greeted me and took me to a far away table “reserved for the final step in processing our iPads.” (his words)

I wondered aloud about the other five stations “back other there” in the other part of the media center.

“Shouldn’t I be helping out at one of the busier stations?” I asked. Those stations seemed to be doing the important stuff – using barcode scanners, six-point device inspections, grilling kids about any lost cords and so on.

“No,” he replied. “This is the hot spot. You’re needed here.. Kids will bring up their iPads. You will press the off button and look on the back of the case for the student’s last name. Then you set the iPad on the properly labeled cart. That’s it.”

Now I was nervous.

“This a ‘three step’ station,” I said. “Do you really want me way over here all by myself and no where near you guys?”

So the lines of kids started heading my way.

And I was surprised by the education I received – iPad by iPad.

You may think that looking at a student’s iPad right before turning it off and then stacking it away for the summer would be a no-brainer activity. Perfect for me. But far from it. It’s totally different than any of those end-of-the-school-year book returns I’ve helped out with before.

Looking at all of the various screensaver images that ultimately had to come my way gave me a brief glimpse into every student’s unique personal world.

And the students knew it, too. Each one watched me closely as I glanced at their chosen image.

Despite feeling like I was the county dogcatcher rounding up everyone’s beloved puppies, I was amazed by how willing the students were to talk.

When the screensaver showed a group of people gathered on the beach in front of a cottage, for example, the student would point out their family members and say where the photo was taken. I saw many different family photos. They were a blast to ask about – and I felt I was on safe ground.

Most screensavers were not informal “whole family” portraits. Some were single photos of the student with mom or grandma. There was always a story to go along with them – and I usually I received the “Cliffnotes” version without even asking.

Sometimes I’d see a photo of just friends (usually girls) all with “funny faces” and goofy postures. You’ve seen these kind of photos hundreds of times, I’m sure.

A few screensavers simply showed the student standing or sitting alone. “Hey, nice photo,” I’d say. “Did a friend take this picture?” (And it still haunts me that I never got a “yes” in response to this question…)

Other screensavers highlighted the classic logos of the Detroit Tigers, Chicago Cubs, the Redwings or the Blackhawks. There were also logos from various international futbol teams. After hearing some of the comments from the students, I was often glad to see a sports logo displayed on the next iPad. (It was a good emotional break…)

I’d tell you that I saw it all, but I didn’t. Our district’s technology code of ethics limited the range of available choices for screensavers, no doubt.

But I saw some the strangest images ever. More than once I saw screensaver images that matched up with the tattoo on the arm connected to the hand giving me the iPad.

I also checked-in a couple of iPads that looked like they hadn’t been touched all school year. (Hmmm. Strange. Relatives of Michael Dell’s maybe?)

And here’s one more observation: If you ever want to get an idea about how many of the young people at your high school are also young parents themselves, work the last station on your district’s device turn-in day. Their screensavers will tell you a lot.

You’ll see some incredibly cute babies cuddled in the arms of some very, very young parents.

These photos gave me the same mixed emotions you would have – but boy, am I glad these young parents (kids really) are enrolled and engaged in our high school’s programs. They’re surrounded by people who care for them.

I never would’ve imagined that our school district’s “tech team” members have so many opportunities to learn about what’s on the minds of our students. Constantly. It makes me wonder if we should include them in our future “school climate and safety” workshops. They sure see our students from a much different vantage point than mine.

As these district “school climate and safety” workshops come up, I doubt if I’ll be asked to help out with the tech support, though.

No one told me that I was also supposed to power down and separate the iPads on their respective carts by grade level and not just alphabetically. I don’t think my I earned a very good marks as an iPad check-in volunteer.

But on the plus side, no one sends me any of those “all call for help” emails anymore.

Thanks to me, our tech specialist and his team have learned to target more effectively. 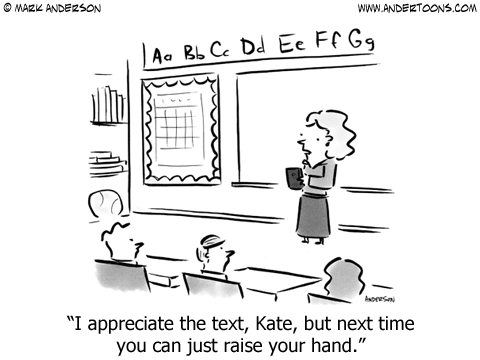