[This value-packed gem was originally posted in 2012.]

Schools and businesses share the goal of developing human potential, but educators are often exasperated by “business thinking.”

The way to produce more high school graduates who are college-ready is to hold teachers’ feet to the fire and run schools more like a business, business leaders say. It’s not that easy, educators say.

No national speaker frames this debate better than Jamie Vollmer.

Vollmer is a super cool businessman. (No kidding. He ran the ice cream company once voted best in America by People Magazine.) Vollmer was a founding member and executive director of Iowa Business and Education Roundtable, which sought to improve schools by injecting business practices – until an English teacher pointed out why a manufacturing approach is the wrong model . . .

Vollmer still believes schools need to change, but not because of sub-par teaching. It’s our system of education that’s obsolete, he said. It was designed for an industrial America that no longer exists.

When I interviewed Vollmer in 2012, he chuckled as he recalled that many of the buddies he graduated from high school with in the 1960s never aspired to college, even though they would have been considered “college material” today.

“That economy’s gone,” Vollmer said. “Today, only 13 percent of jobs that pay a decent wage are unskilled labor. And, if you listen to what’s being told to us, soon it’ll be just 6 percent. Clearly, the nation cannot afford a dropout rate. This economy has almost no place for them.”

“It’s impossible to impact student achievement without changing the culture of a community, and that’s why it’s so darn hard,” Vollmer said. “Focusing on things like instruction, assessment, and the school calendar, in and of themselves, won’t get at the root of the problem.”

He says he’s witnessed educators’ valiant efforts to improve everything in a school district’s domain. In the end, the only thing that ultimately changes is the nameplate on the superintendent’s office.

“As long as a community’s response to change is, ‘That’s not the way we do it here,’ making progress doesn’t have a prayer,” Vollmer said.

His book, Schools Cannot Do It Alone, is a primer for subtle but effective ways to build the community support for schools that will make real and lasting change possible.

It’s time communities get a wake-up call, Vollmer says. Expectations of schools have multiplied, but the school day and school calendar haven’t expanded.

As the median age in America climbs, the percentage of households in a community with school-aged children shrinks. Vollmer counts himself among the Baby Boomers who, based on his own experiences, held an antiquated view of what school is like.

Reaching those people requires pulling together a cadre of school staff (teachers to bus drivers) to “map” places in the community where people congregate. Schools then need to strategically send volunteers to these places with well-crafted talking points.

“Self-interest doesn’t always beat altruism, but that’s the way to bet,” Vollmer said. “Do-it-for-the-kids won’t move everyone. They have to see the connection between their quality of life and the quality of their local schools.”

In a perfect world, community members would flock to school to get school information, but that’s not how it happens, Vollmer said.

Board meetings are sparsely attended. The only way to attract a crowd is to propose a tax increase, threaten to eliminate a popular program or service or feed people for free. And school leaders cannot rely on traditional media to get their message out because of the “if it bleeds, it leads” nature of the commercial press.

Instead, Vollmer says school communicators must begin by creating a team of allies who will help them identify positive things already happening in schools. They need to talk about those things in the community.

Touting the streak of days a district has safely transported students to school, the number of insulin injections the school nurse gives weekly, or the combined weight of vegetables served annually in cafeterias may not seem like headline news, but it builds community trust ­– a prerequisite for change. 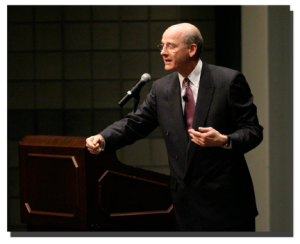 • Shift your attention to the positive.

•  Stop badmouthing schools and colleagues in public. (How often are we our own worst enemies?)

• Share something positive within your network of family, friends, neighbors, and coworkers.

• Sustain the effort.  (Where school communicators can really kick it in!)

“If everybody in the district did just those five things, the ripple effect would be felt across the community,” Vollmer said. “That’s the way you counteract negativity and begin to forge inroads that can result in real change.”

Posted in Expert Insights, Your Marketing (How you connect) and tagged school reform