It makes for an anxious day, I’ll tell you that! 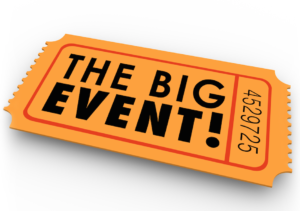 We honored Dwayne “Tiger” Teusink (now 80) who served as a teacher and Hall of Fame tennis coach at our high school before retiring in 1989.

After weeks of planning, which included minor construction and the installation of a new archway bearing Tiger’s name, the athletic director, facilities director, board trustee co-chair, and I were excited to unveil the archway and host an outside reception for our community.

Our committee knew Saturday’s crowd would be huge.

Tiger guided our state’s primary youth tennis organization for many years and he still stands as one of its most successful tennis team coaches.

He is adored and admired by legions of former student athletes.

Along with media and publicity duties, I was placed in charge of securing the sound system, refreshments, and chairs.

Because weather reports earlier in the week weren’t promising (calling for “non-stop drizzle”), I rented a big canopy for $400.

I even had the canopy put up on Friday so we wouldn’t feel rushed for our noontime “unveiling” event on Saturday. 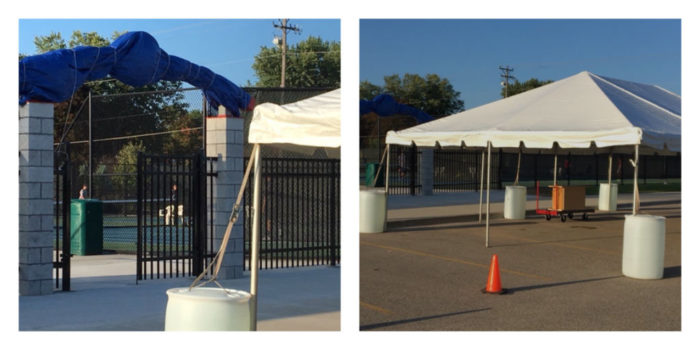 Within seconds of the canopy going up, out came the sun and away went the gray clouds.

Somehow the predicted drizzle had morphed into a stunning blue sky.

But that would make things even better, right?

So with the archway covered in a blue tarp, I began to line up 150 folding chairs under the tent.

Now here’s where Murphy’s Law kicked me in the rear.

After setting up a few chairs under the tent, I sat down in one of them to see how things looked.

I quickly discovered that due to the sight line, the curb step, and other stuff having to do with physics (AKA basic common sense), every guest sitting in a chair wouldn’t be able to see the archway at all!

In fact, they’d only be able to see the torsos of the people at the podium and not their heads!

Instead of the canopy being a welcome addition, it was now a gigantic obstacle, anchored by 250 pound white barrels.

I couldn’t believe it.

I planned for the forecasted rain.
It was now clear.

I brought in a canopy.
And now it blocked everyone’s view. 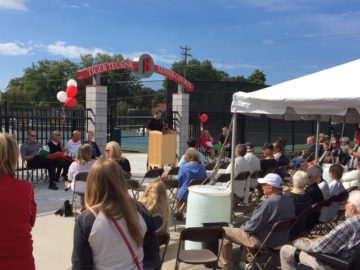 Fortunately, once the event got underway, no one noticed the logistics or the intended set-up.

It was all about wonderful stories about Tiger and hearing the affirmations about why he is loved by so many.

So the event actually turned out quite well despite Michigan’s weather and Murphy’s Law conspiring to give my stomach flip-flops.

And I’m going to ask crisis response expert Rick Kaufman if he’s experienced anything like this, too, at tomorrow’s Lunchinar.

I hope you’ll join us. 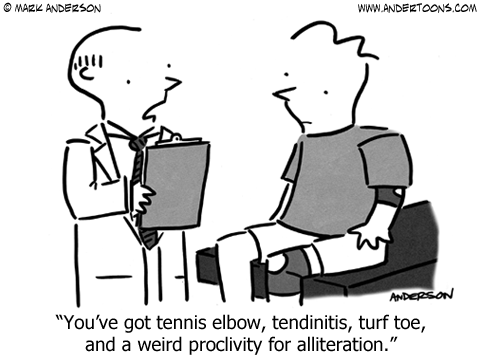