On the day the 2012 National Teacher of the Year was announced in Washington D.C., a local TV station led off its broadcast describing how a teacher had been fired for shooting off a cap gun in the classroom. 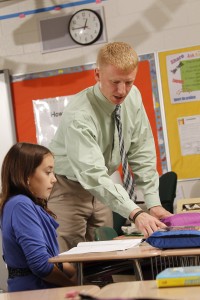 But it’s essential to get positive stories out there. They promote every school’s intangibles – the sharing of best practices, expanding understanding, and imparting hope.

So where to start?

What’s the easiest way to bust through the all-news-is-bad-news barrier? Start a blog, open a Twitter account, and begin telling your own stories on the internet, Josh says.

“Educators are hypocrites if we complain about the bad things said about us, but fail to stand up and talk about the good things,” Josh said. “Standing up and speaking out is up to us.”

It’s not hard to find Josh on line. Since Stumpenhorst is a last name that’s “easy to have fun with,” Josh uses “stumpteacher” as his Twitter handle, YouTube channel, and Skype name. (“Keeping it the same helps me remember it!” Josh says.)

Josh’s blog – as busy as any active “two year-old!”

Josh started his blog, “Stump the Teacher,” at the summer 2010 International Society for Technology in Education conference, and has continued writing two or more posts per month during his off time.

The blog today is a mixed bag of whatever’s on Josh’s mind: happenings in his sixth-grade language arts and social studies class at Lincoln Junior High School in Naperville, tutorials, resource recommendations, and musings on education reforms.

He confines posts to a single page, wary of making any topic more complicated than it has to be.

“If I’m not getting across what I want to say in one page, I’m probably blowing in the wind and need to do something different,” Josh says with a chuckle.

The blog resonates with an audience that’s predominantly teachers and school administrators. “Stump the Teacher” gets 10,000 to 20,000 views monthly, depending on how many new entries he writes. 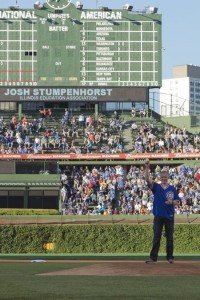 No fear of writer’s block.

No matter how frequently Josh posts, he says his list of potential blog topics grows faster. He generates ideas through conversations with colleagues, interactions on Twitter, even his relationship with his own young sons.

Twitter is often the preferred mode of communication for Josh, who considers it faster and better than the search engine Google for finding what he wants.

“Google can be a crapshoot,” Josh said. “With Twitter, you get information from people you know and who know what you’re looking for.” 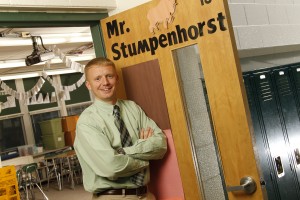 For example, when a student writing a report on Hershey, Penn. came to him for research help, Josh tweeted out the request to his more than 7,000 followers.

In short order, two followers chirped back. One was a lifelong resident of Hershey and another had been employed at the Hershey chocolate factory. This gave the student primary sources the school library couldn’t offer.

It was through Twitter that Josh also became friends with a Pennsylvania principal whose second-graders were learning about Abraham Lincoln. Their teacher wanted students to give their reports via Skype to older students familiar with the president’s life, Josh said. His students were delighted to watch and provide feedback because their school is named for President Lincoln.

There are 24 hours in a day. Josh tweets more.

As you’ve probably guessed, Josh is a voracious tweeter. He tweets an average of 30 times a day, but sometimes reaches the 100 mark if he’s conversing over Twitter, instead of email.

“Computer Club used to be three or four self-professed nerds in the lab playing computer games until my principal let me take it over,” Josh said. “With a heavy focus on video production, the club has grown to 30 members, and I’ll let it grow as big as the number of kids who are interested.”

The most popular video project was an all-school lip dub to We Are Family, which was choreographed, executed and edited by the students. Plans are to do a new lip dub every three years to give every student who passes through a chance to participate.

Josh’s most recent project, Collaboreyes, has roots in the 2011 ISTE conference in Philadelphia, where Google was handing out goofy sunglasses with its name written in the bows. Josh and fellow teachers Kristina Peters, Jeremy Macdonald, and Josh Allen had fun being photographed in the shades at historic sites throughout Philly.

Teachers asked Google for 250 pairs of the glasses, which they could then send to students around the world who would wear them in a photo taken in a place not in history textbooks. The photo and the student’s essay about why the place is special would be uploaded to a site, which would become a unique atlas.

Google refused, but the project was subsequently funded by the George Lucas Educational Foundation.

Collaboreyes is now populated with posts from children living in the U.S., China and Romania. Arrangements are being finalized to include Collaboreyes in a mission to outer space in 2013.

“Social media takes time, but everybody makes time for what’s important,” Josh said. “All of us who are educators need to make time, show what we are doing with students, and promote our positive stories.”