Refreshed after spring break? Hope so!

I’m re-starting the Encourager today after a few days off and I think the slower pace of spring break gave me the opportunity (or the curse) to mull over several new topics; one of which is how we use of the prefix “re.” (Dumb, I know. But I’m not sure I “re-lax” like normal people do.)

When the prefix “re” comes before an actual word, it can mean lots of different things. And some of them may even involve more work for us – like when my boss sends back one of my draft documents with several areas circled and labeled “re-do” or “re-write.” (Dang it.)

Usually, though, the prefix “re” before a word doesn’t signal anything requiring much effort from us.

Even in these cases where “re” means “one more time!” there is usually only minimal stress and strain. Consider: re-run (No sweat if applicable to a Law & Order episode, but not for a 15K marathon, admittedly), re-cycle (My daughters are all over me on this one), re-consider (I may even be better at re-cycling than this one), and re-flection (Do you even know what a flection is? Me either. So why do it twice?)

But there is an exception: the word re-form. Because in this case – and a big thanks goes to G.K. Chesterton here – when you begin to “re-form” something WITHOUT FIRST making an honest effort to define the original “form” itself (including all of its traditions, benefits, disadvantages, lasting values, and purposes) your “re-form” efforts will probably be shallow and self-serving. Without taking on the pre-work demanded to fully understand and articulate a better vision and structure than what’s currently in place – most “re-form” efforts bring about confusion, division, inconvenience, and a never-ending series of further “re-forms.”

Chesterton believed that re-formers first have to be very knowledgeable about the “form” that they want to see dismantled or improved. While words like “re-run” and “re-consider” don’t necessarily mean extra work for the people involved, the word “re-form” always should.

Chesterton says that it’s hard work to be an effective re-former. And he’d note that politicians as a general rule seem more unwilling than most to take on this extra burden. (Of course, he lived back in the early 1900’s, maybe our own legislators are more diligent today…)

For school leaders and communicators confronting a multitude of education issues in today’s “school choice” and competitive environment, there’s another word that we occasionally toss on the table that is connected to a lot of work. This word is “re-branding.”

Re-branding isn’t about re-packaging, re-purposing, or re-designing. It’s all about understanding the real-world “experiences” of your parents, students, staff, and community members in your schools, and then working to determine, if and where, a new vision – with improved experiences – is possible and preferable.

Re-branding isn’t easy. Like many attempts at re-forming, sometimes you can make things worse. (For sure, I can. But who’s counting?)

And here’s a surprising re-branding model I discovered over spring break. You might have even heard the ads or seen the social media blurbs, too. The Smithsonian Institution – and all 19 of its museums and zoos – have launched an upscale, aggressive re-branding campaign.

Check out the Smithsonian’s coordinated tagline and new website: www.seriouslyamazing.com

You’ll see how hard work, fresh wording, customer research, graphics, and creative design are igniting a whole new attitude and approach. The Smithsonian has raised the standard for the experiences they want to offer their users. Their commitment to “engage first” before rolling out the full depth and width of their knowledge base may seem risky to some, but is it really? They’ve demonstrated right away on their website that they want to actually “walk” their new “talk.”

That’s seriously amazing to me.

And I’m glad you’ve re-turned to your re-sponsibilities at school after some well-deserved re-laxation. I also have a re-ward to share with you here tomorrow. No foolin’. 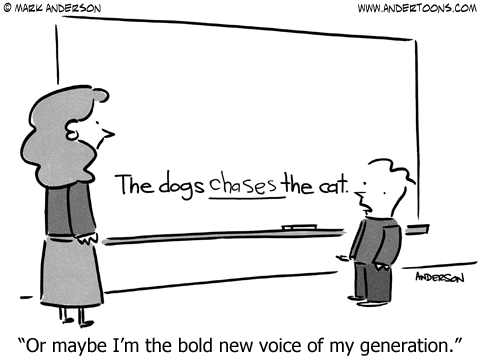