The intersection could be good, a la Miguel Cabrera’s 100 mph bat colliding with a pitched fast ball that was heading down the center of the plate.

The intersection could be costly, a la my daughter scraping the side of the car with the side of the garage door frame while backing out of garage. (C’mon, you really didn’t think I’d spotlight one of my own mistakes, did you? I can’t start the week off with that…)

Or the intersection could be routine, a la whenever a school situation sparks that sudden meet-up of “huh?” with “who me?” (a common occurrence for me, anyway…)

But the intersections that warrant special attention are the ones in which two pieces of beneficial advice arrive at the exact same time and place.

This happened to me while I was checking my Twitter feed a few days ago.

When you’re on tight household budget at home – still saving for “future weddings”– pleasure is found in the little things. Especially if they’re free.

So, I know my example of a worthwhile real-life intersection sadly doesn’t involve an exhilarating crisscross of a sporty red convertible with a sunny road trip along the Lake Michigan shoreline.

Believe me, I’d like nothing better than to be able to share a personal “intersection” experience with you that has me smack dab in the middle of something flamboyant and totally carefree.

But nope, the only intersection experiences I’ll be able to write about (for approximately the next 11 years or so…) are those that are rooted in the frugal and practical.

So, back to my non-breath-taking Twitter feed last Friday…

The first tweet that attracted my attention came from Leslie Robinette, a school district communications director in Oregon.

If you’re looking to begin or expand a social media plan within your own school district, I thought the article she wrote for NSPRA (the National School PR Association) was pretty darn good.

Maybe even better if you’re looking for ideas in responding to this challenge.

And here’s my awesome example of an intersection for you to consider.

The tweet that immediately followed Leslie’s was one from Pam Dyer, a marketing and communications expert who writes a blog she calls “Pamorama.”

The link she provided in her tweet takes you to her article that featured step-by-step guidelines to keep in mind if you are trying to improve your effectiveness on Facebook, Google+, and Twitter. Here ’tis.

These back-to-back tweets provided a highly relevant convergence of both “why” and “how” – and this doesn’t happen all that much.

In fact, I don’t think I’ve ever used the word “convergence” before.

I hope you’ll look over both Leslie’s and Pam’s articles.

Plus, the very next tweet presented a fun “social media” themed back-to-school cartoon.

All in a row. All on the same topic.

All connecting at the same time and place.

And all under budget.

We’re on a roll into a spectacular Monday, folks! 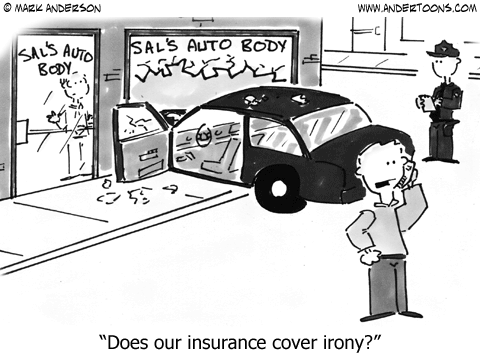