As I look up at the above headline (Report #4 from…), I realize now that I attended the wrong mid-afternoon break-out session at the Agents of Change Conference 2013.

But I didn’t think so at the time.

Instead of going to the “Crush Headlines like the National Inquirer!” workshop, I went to a sports story workshop given by Butch Stearns, a former Boston based TV & radio sports personality.

Heck! What was I supposed to do? Butch had lots of interesting stories to tell. He was on Detroit radio for five years decades ago before moving to Boston – and he’s interviewed stars like Al Kaline, Denny McClain, Sparky Anderson, and even Roger Clemens on the very day he struck out 20 Tigers in a nine inning game.

So you’re probably going to have to put up with a few more inferior (aka boring and crappy) headlines for awhile until I get further training – and I’m sorry about that – but Butch is a fellow baby boomer. I felt I needed to be there for him… to be the one person in the room openly impressed by all of the athletes he’s met throughout his career… since most of the younger attendees didn’t have a clue who he was talking about.

Another mistake I made was in yesterday’s Encourager.

To provide you with a way to feel appreciated, respected, and valued for what you do as a dedicated professional educator, I recommended that you attend a “non-school related” conference or seminar.

Some of you responded and let me know that you have been attending conferences and seminars that fit this requirement – only that these meet-ups were comprised of primarily legislators and bureaucrats – and any hoped for “warm fuzzies” were totally non-existent.

I shouldn’t have missed this, especially since the symbolic “monument to political indecision” was only several miles away from me while I was in Maine.

Top administrators of every organization can empathize with this story. 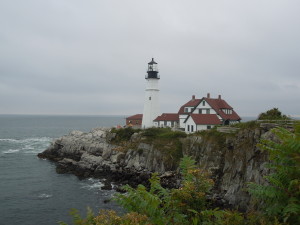 The Portland Head Light is a historic lighthouse in South Portland. It sits at the entrance of the primary shipping channel into Portland Harbor.

It was commissioned by George Washington in 1790, and he’s not the example of the kind of politician that confounds our work.

It’s the batch of politicians who came on the scene later that I’m talking about.

I hope these two photos taken the day after the conference will help you envision all that happened. Pay attention to the “ring” around the lighthouse about 2/3 of the way up.

All was hunky-dory in Portland Harbor for more than 100 years. The lighthouse was fulfilling its mission and purpose (with only minimal annual improvement planning required I’m told) and ships were coming and going safely. 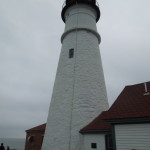 At the turn of the last century, elected officials decided that since there were newer lighthouses to guide ships into the harbor, Portland Head Light should be lowered by 20 feet.

Big stones and masonry were removed and the lighthouse was reduced to the level of the ring you see in the photo.

It didn’t take long for a shipwreck to occur which killed 42 people.

The elected officials then reconvened and voted to have the lighthouse raised by 20 feet.

The trouble was that due to the previous reconstruction, it was no longer possible to match the stone work (below the ring) anymore, so basic bricks (also painted white) were used above the ring.

All was fine until another crop of elected officials (probably the offspring of the previous incumbents) decided that the whole “ring thing” was an embarrassment. So they voted to lower the lighthouse by 20 feet to try and put this matter to rest once and for all.

Without social media around to spread the word quickly to the citizens, the lighthouse was indeed lowered, and considerable time passed before the public outcry arose.

But arise it did. And the heat was turned up, and nervous politicians voted to restore the lighthouse back to its original 1790 height.

Today… local Portland officials now proudly tout their Portland Head lighthouse as the only one in the U.S. with a ring around it, a ring which separates two different kinds of building materials.

I know many of you have experience in leading districts through times of school construction.

Think of the stories you could share over a beer about assorted legislative proposals with the ghosts of the former Portland Head Light administrators. (You’d have to pick up the tab, however.)

So… why the rush?

Mike Stelzner is the founder of a very popular website called the “Social Media Examiner.”

The tips offered daily on this site are rich and cover the full range.

The massive audience of the Social Media Examiner have even made him a millionaire.

Mike and I chatted for nearly an hour at the conference and I’m going to present this conversation with you on Monday.

It contains what surprised me the most.

For now, be encouraged by the fact that Mike Stelzner (young dad and entrepreneur) is totally on your side – 100%,

He’s also be frustrated by the micro-managing and posturing that our politicians can’t seem to refrain from, even though we are all in the midst of very turbulent times.

It’s almost a pipe-dream to hope that our elected officials would strive to promote stability and predictability, while the entire world undergoes a fundamental shift.

And as the entire world is ratcheting up the pressure on us for even more “ON DEMAND” customer services and products… our work is becoming increasingly difficult when it’s our own politicians leading the way with a list of their own DEMANDS (always subject to change and interpretation).

I’m glad Mike Stelzner and many others at the Agents of Change conference understand the magnitude of the transitions we’re going through and its challenges.

It makes me feel better as I witness the demise of my morning paper, my radio, and my network TV shows.

But not as good as those old Butch Stearns sports stories, though. 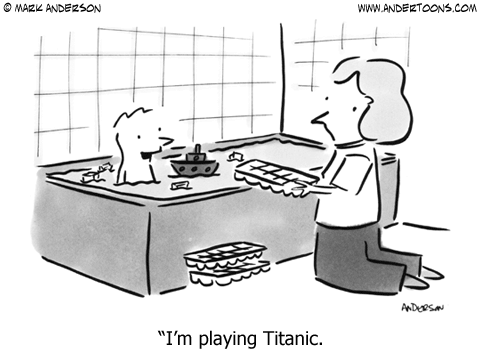