Or do you want to hear a lot more about the idea first?

This seems to be a reasonable response too, don’tcha think?

What caused me to stop and think about how we respond to new ideas was this week’s cartoon from marketoonist Tom Fishburne.

Obviously, Fishburne believes many leaders – in keeping with the strong tendency to be automatically “risk averse” – are far more likely to greet incoming ideas with a speedy-kwik whack instead of taking a different approach.

This also seems reasonable to me.

How responsible would that be?

we must be open to new ideas, better ways, and well-intentioned critiques, right?

(At least that’s the common refrain I hear at home!)

So we don’t always help ourselves by playing it overly-safe and immediately begin bopping new ideas back down from whence they came.

A leadership coach I heard the other day said it’s better to respond to people offering new ideas by simply using the word “wow” instead of “how.”

He said that when we hear a new idea, we will often say “how?” in reply.
(Meaning, Huh? How much would that cost? How would that help? How do you know?)

And by doing this we shutting down the idea presenter without providing any encouragement or affirmation. 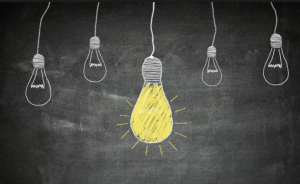 When substitute “wow!” for the word “how?” we’re still remaining non-committal about the idea itself (which ain’t all bad, of course, because the devil’s always in the details) – but at least we’re affirming the presenter as a person and demonstrating we’re open to giving all suggestions a bit of consideration.

Because remember, to actually get one or two good ideas you can act upon every now and then, you need lots of ideas to come your way.

So there’s nothing to be gained by not extending a pleasant head-nodding “wow” to the folks who report to you.

Besides… after you hear an idea,

and allow some time to go by,

you can always give the idea a big whack when no one’s looking!

(FYI: I added this last part. The leadership coach just basically said to affirm your people and left it at that.)