There’s a fantastic TED video that you might want to take a look at. Rob Legato has won awards for his creativity and skill in creating special effects for many premier movies. His contributions were key elements in Titanic, Apollo 13, and Hugo – and they’re featured in his entertaining TED presentation. It’s right here for you.

I can’t help but be impressed by the “Oscars” Rob has earned. What a talented guy. (I wonder if he knows I recently won a case of books… )

In watching this video, one of the take-aways for me was how we – as viewers – are counted on to participate in many of the special effect sequences. Here’s how: when special effects coordinators put together an action-packed scene which requires several planned combinations of intricate and complicated footage, they frequently must toggle between “staging sets” built in full size, and some constructed as small models. These transitions are never without minimal flaws.

Naturally, sophisticated computer graphics enable coordinators to edit and patch together all of their intended effects, but they need us (actually, our brains) to help them “smooth out” the micro-second transitions that occur on film between the “life size” and the smaller scene-shop models.

Apparently, many special effect movie scenes incorporate a number of rapid transitions and edits which would be easy for us to spot if it were not for our brains unconsciously playing along.

The special effects folks know that we all all have what’s called a “persistence of vision.” If they plan out their special effect scenes well and edit them “tight,” when the movie then goes up on the big screen, they can depend on us, because of our brains, to seamlessly “fill in the gaps.”

I guess we do this all of the time. More than just at the movies. (And certainly you’re forced to “fill in the gaps” often enough when you read my writing. And I’m grateful – even though your “persistence of vision” is a reflex action and not something you can choose to do.)

I watched this video in conjunction with a talk given by another award-winning film maker. He asked what was the #1 movie special effect… the one that if you blew it, it’s bye-bye box office. (And no, basic camera work is not categorized as a special effect.)

He said that the #1 special effect in a great movie is the music.

While movie creators rely on our “persistence of vision” reflexes to bridge the unavoidable brief transitions between special effects clips, they also rely on music to connect with our emotions from beginning to end. If they do their jobs right, this all happens without us even knowing it.

When the TED presentation began and I first heard about this “fill-in-the-gap” thing, I thought I already had this down pat. Few people can “jump to conclusions” and “rush to judgement” better than me.

This is not what Rob Legato is talking about, of course. But you can’t help wondering about some of our more routine school information events. We try so hard to get the visuals right, but we may be missing the “musical” element – even if it’s just a spirited pre-event overture. 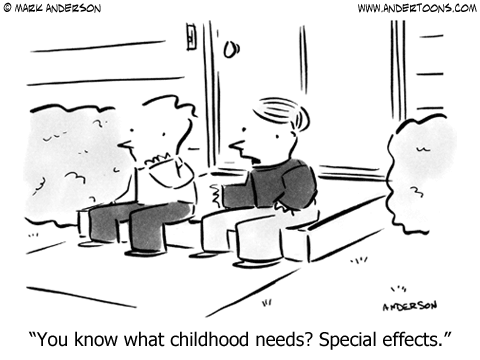