So, how can you get more exposure for your school district when the marketing budget is already stretched paper-thin? 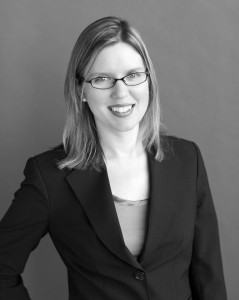 Train volunteers to advocate for your schools — not at school, but through their connections in your community.

Prepare to be inspired by Sara DeVries, marketing and communications director at Herrick District Library, which serves people in the City of Holland (Mich.) and three adjacent townships.

Sara, like most school communicators, is a one-person office. Her district library weathered the economic recession, but now has 25 percent less operating funds and 25 percent less staff who, remarkably, are doing twice as programming.

“Staff was feeling the pain of being stretched thin,” said Sara, remembering why HDL initially passed on doing a local version of the popular Geek the Library campaign, even though funding for materials was available through the Bill and Melinda Gates Foundation.

Staff only has time for in-library duties. There are no paid hours for them to work in the community to raise the library’s profile, even though HDL needs to lay the groundwork for a millage election in 2016 – its first funding request in 20 years.

Can we afford not to do it?

Sara contended HDL couldn’t afford not to do the campaign. Other communities have successfully built broad-based community support through Geek the Library – a campaign template created by OCLC (Online Community Library Center), the same nonprofit organization that provides the online catalog WorldCat. 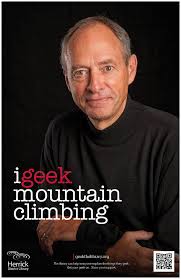 Premise of the campaign is that, no matter what a person “geeks” (i.e. is passionate about), they’ll find value in the library. Hallmark of the campaign are professional portraits of familiar local faces printed poster-sized with a line about what they “geek.”

Sara got board-approval to proceed with “Geek the Library” – as long as she could find volunteers to do the community outreach.

A graphic arts intern was brought in from neighboring Hope College to assist with print materials and event planning, but otherwise Sara was on her own.

Libraries, like schools, love volunteer power. But using volunteers to represent the library in the community was a new animal.

With the goal of creating and informed and invested bank of volunteers that could also support the library’s millage request in two years, Sara decided to seek “geeks” who are already tapped into the community and comfortable with public speaking.

She began by hosting a gathering for the library board, library staff and “friends” group. Nothing lavish – just music and a disco ball because Sara “geeks” disco. Attendees suggested neighbors they thought would represent the library well.

“Our goal wasn’t owners of international businesses who have their names on buildings around town,” Sara said. “We were looking for key influencers throughout our community. PTA (Parent Teacher Association) presidents, Chamber of Commerce members, small business owners.”

Eventually, 120 geek ambassadors were photographed who thought of ways they could promote the library in their circles of influence.  Professional photography for the Geek campaign was provided through Macmedia, a nonprofit organization located at that time in Herrick District Library. Another 30 geek volunteers made the commitment to plan and staff one informational community event.

“Being open to ways that volunteers want to connect is, key,” Sara said. “If we define what needs to be done, then just go out and find a volunteer to do it, that feels like filling a job description. Volunteers feel no ownership if they don’t plan the activity.” 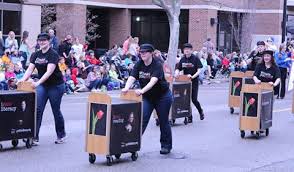 Soon “Geek the Library” posters were hanging in frozen yogurt shops, coffeehouses, and even motorcycle repair shops. Some geeks marched in parades and ran races. Others answered questions at an annual meeting of Ready For School, an early literacy initiative.

Geek ambassadors took turns being “Geek of the Week” on the library’s Facebook page. The geek buzz, Sara said, eclipsed anything the library could generate.

For example, library’s Facebook posting of a leader of a nonprofit organization in front of his “Geek the Library” image rendered as a billboard drew a respectable 34 likes. But when the leader himself posted the same photo, it immediately got 237 likes and dozens of comments. When the leader’s wife posted the photo, it drew more than 100 likes, demonstrating the reach of social media.

Many organizations would consider using volunteers for advocacy too problematic, but Sara said volunteers didn’t require appreciably more training and management than if library staff had been used.

She had to train geeks, provide materials, give them monthly updates on how the campaign was progressing, and listen to their feedback to know how to modify the program.

To make training as convenient at possible, she provided it virtually by posting a PowerPoint presentation on Slideshare. The training included short answers to common questions, including: How is the library funded? Why is the library open fewer hours than it used to be? What were the implications on staff when the library moved to RFID (self-checkout)?

Library circulation figures reverberated with geek power. There was an uptick in electronic collections of books, audiobooks, music, movies, TV shows and magazines, suggesting that pockets of the community didn’t know the library loans these materials.

“Geek the Library has definitely helped increase community awareness of the immense value the library adds to the community,” Sara said.

How could your school district better use volunteers to promote its value to your community?