The Super Bowl has a unique place in our media-driven world. 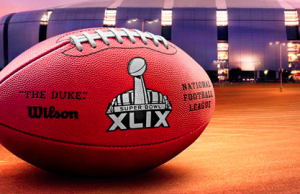 Last week, in a rare moment of courage, I revealed that Cindy and I often talk to each other by trading questions back and forth.

And then – regardless of the actual item I’m scavenging for – she always has the same default answer, “Where did you last see it?”

We carried this habit with us in the car as we rode to our friend’s Super Bowl party yesterday.

“I know what you’re gonna write about next,” she stated. “It’ll be about the Super Bowl, won’t it?”

“But what’s left to say about it?” she asked. “I mean, haven’t there been about a hundred Super Bowls by now?”

(Obviously, Cindy is not a publicist for the NFL.) 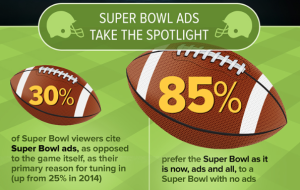 “No, far from it,” I said. “And did you know I’ve watched every Super Bowl on TV since the very first one?”

“Now that one I believe!” she grinned. “Did you sit on the very first reclining couch ever built, too?”

(Boy, she has no appreciation for the history of football at all.)

“Very funny,” I shrugged, finding solace in a lame cliché of all things. “I’m really looking forward to seeing everyone tonight. Are you?”

“Yeah, I’ve got some catching up to do. We haven’t seen Brian and Kris for months.” she said,

Then she asked the one question she always does about an hour before the Super Bowl begins, “Now remind me again; which two teams are playing?” 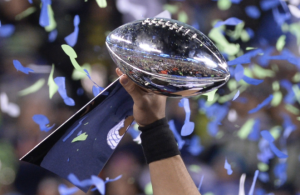 At least she didn’t ask if the Lions were playing.

I hate having to admit that I’m still a knucklehead dreamer from Flint.

Thankfully, we pulled into the Schroeder’s driveway right as we were running out of questions.

And here (just for you!) is some of the Big Data pertaining to last night’s Big Game.

You may find it interesting – maybe even enough to question.

Did you catch the two points featured in that green infographic above?

Both highlight why the Super Bowl stands alone as a larger-than-life TV event.

In a recent poll conducted by crowdtap.com, 85% of Super Bowl viewers say they prefer watching the game as it is (with its ads!) instead of watching a Super Bowl without them.

So, what is it about the Super Bowl ads, anyway, that practically raises them to an “interest level” almost to that of the game itself?

Is it their cost? ($4.5 million for a 30 second spot)
Is it their reach? (110 million viewers worldwide + the Schroeders)
Is it their creative edgy-ness? (Some hit the mark. Many don’t.)

Is there anything we can learn from them that’ll help us better promote our schools?

That’s the question I’m going to take a shot at tomorrow and I may need your help.

So, if you’ve got some thoughts on this, please get back to me speedy-kwik.

I may have to devote a fair amount of time answering a different batch of questions, and your contribution could bail me out.

You see, Cindy whispered to me last night while I was loading up my plate of munchies right before kick-off, “You did remember to record Downton Abbey on the DVR back at home tonight, didn’t you?” 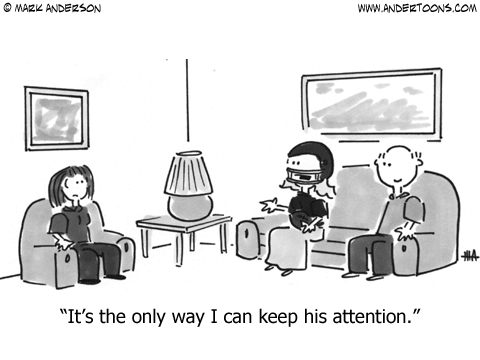