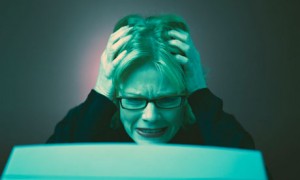 I was feeling more like a dinosaur than a student as I sat in a virtual classroom for the first session of a graduate-level course in technology.

But a smile got me through it

The last time I had formal technology training was in 8th grade. The class was keyboarding on a manual typewriter. (No snide age remarks, dear readers. I have a pre-made defense: digitization didn’t start changing everything until search engines made navigating the Internet easy in the mid- 1990s, and that’s not so long ago.)

I taught myself the word processing skills I’ve needed as a reporter and always worked for companies with IT experts you could call in to solve the tough stuff.

It was immediately obvious that this technology class could be my Waterloo. All the assignments are on Microsoft Office Suite, and I’m a MacBook user. That meant, before I could tackle the first project, I’d have to figure out how to add a Windows operating system, download new software, burn bootable disks, and install programs in the new Windows neighborhood.

There was no IT department waiting in the wings. And I scarcely knew where to begin.

The smile that got me through it

It took me a few days fraught with frustration to get up and running, but it wasn’t the youtube.com tutorials that got me through it. It was a funny memory my technology professor stirred in her first lecture.

She described today’s workforce as a combination of digital natives and digital immigrants. A surefire way to distinguish the natives from the immigrants, she said, was asking who had ever  changed channels on their TVs by walking up to the set and turning a knob. (Remote controls for TVs were one of the first digital technologies in most American households.)

The prof’s statement triggered a memory of my family’s black & white TV back when I was in kindergarten. We not only had to get up off the couch to change the channel, we had to use pliers to manually change the channel. That’s because a younger sister had yanked out the dial and flushed it down the toilet, causing a plumbing nightmare that occupied my Dad and an electric eel for most of a Saturday. (Neither the natives nor the immigrants would claim my family!)

Remembering using pliers to change TV channels made me chuckle during that first lecture and lifted my burden of impending GPA doom. Strangely, I felt more confident about leaping the Apple-to-Windows hurdle.

Cartoon Power! And tips for you!

My a-ha chuckle moment caused me to wonder about value of humorous images. How is it that cartoons can help us relieve anxiety, connect us with our humanity, and remind us not to take ourselves so seriously? 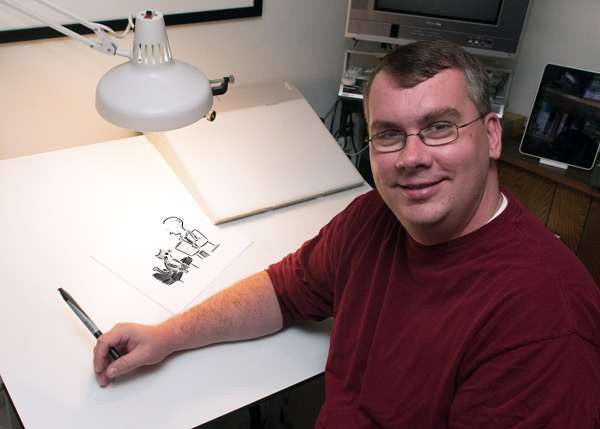 To get an idea how cartoons work, especially in education settings, I called Mark Anderson. His “Andertoons” cartoon runs in The Encourager, SCN founder Tom Page’s blog. Readers love them.

Mark, who draws from a studio in his suburban Chicago home, told me he sells a lot of education-related cartoons to textbook publishers and producers of school newsletters.

[pullquote]“A cartoon asks nothing of the reader, but can be a fast and powerful way to connect with an audience,” Mark said. “It sets the tone that we can have fun here.”[/pullquote]

A cartoon, Mark explained, is a micro story that’s told in five to seven seconds. (Yup, that’s all the time a reader will spend looking at it. About the same amount of time a parent will take deciding whether or not to read an article you’ve written for the school newsletter. Mark and you share the same battle for grabbing a reader’s attention.)

So cartoons can be understood at a glance, Mark uses only as many lines and words as necessary to communicate an idea. He distills his drawings to basic shapes. He’ll spend an hour reducing a 10-word caption to nine, or weighing which of two words with similar meanings just sounds funnier. 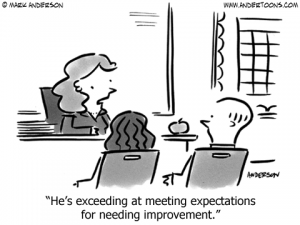 “But how does a cartoonist know what will be funny to someone else?” I asked, thinking that my mental drawing of a TV with a pair of pliers sticking out of it wouldn’t be funny to anyone who didn’t know the backstory of a toddler flushing the tuning dial with her toothbrush down the toilet.

Mark said he plays with universally understood concepts to find something funny, and his wandering imagination never lets him down.

Most of his education cartoons emerge from over-dinner conversations with his wife, Margie, a second-grade teacher, and their elementary school-aged son and daughter.

Seldom does a “funny story” from their days at school morph into a cartoon. Rather, Mark uses chat about routine school activities like taking attendance, listening to morning announcements, or using computers as a springboard for diving into something funny.

The morning of our interview, Mark’s imagination was riffing on the phrase “flattening sales,” which he’d read on the business page of his morning newspaper. He didn’t have an idea for a cartoon yet, but he knew he could have fun with that phrase.

“I don’t understand the why and how of every story on the business page, but I read every word,” Mark said. “Newspapers and blogs are where most of my ideas come from.” 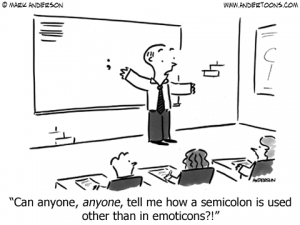 Mark draws an average of 10 new cartoons a week, which become part of Andertoons online catalogue. People subscribe to the catalogue to choose cartoons from several categories to reproduce in their publications. Some of his high-profile customers include the magazines Forbes, Good Housekeeping and Harvard Business Review.

The making of a cartoonist

Mark admits to being the kid who annoyed everybody by continually reading from a joke book. He illustrated reports in the margins of his notebook paper. He’d sneak out of bed to watch comedians on late-night TV, especially “word genius” George Carlin. From a young age he delighted in dissecting what makes a joke funny.

Nevertheless, Mark said he didn’t set out to be a cartoonist. (“No one does,” he told me. “Even clowns have a college. But with cartooning, you just have to pick it up.”)

Actually, his bachelor’s degree is in trombone (which, most would agree, is a funny instrument). He worked as a professional trombone player for a couple of years, but found a career in music performance does not promote domestic tranquility. (I had the same revelation as a sports writer. If you’ve got a spouse and school-aged kids at home, there comes a time when you’d rather not go to work when everybody else is playing.) 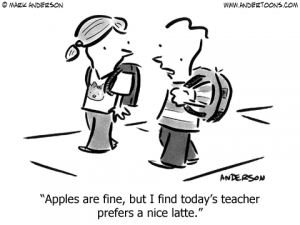 So, Mark put the trombone in its case and took a job cold-calling manufacturers over a three-state area trying to sell screws. (Seriously, can you imagine a job that sounds more miserable than that?) Mark didn’t like the job, but says it taught him a lot about how to be successful in business.

Lesson No. 1: Most things you try will bomb. (He’s sold his cartoons as books, calendars and greeting cards but says sales didn’t justify his efforts.)

Selling screws also drove Mark back to drawing, a lifelong hobby. When he was no longer playing music every day, Mark missed having a creative outlet, so he picked up a sketchbook and pencil. Before long, he was having to coerce friends to play Pictionary with him because his drawings were too good. 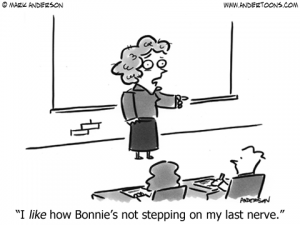 He started selling cartoons about 12 years ago. Within a couple of years he was earning enough to quit his day job. He’s made a go of it, but he says he’s had to be nimble because the economy he’s working in now bares little resemblance to the one in which Andertoons started.

National print publications were initially Mark’s biggest source of income, but the bottom started to fall out of that market as communications went digital. Today, much of his income comes from small companies and organizations producing newsletters, magazines, and ebooks.

He doesn’t advertise his subscription service, but drives traffic to the site with Twitter, Facebook, Pinterst and the cartooning blog on his website, where he gives drawing lessons, online marketing advice, and showcases his LEGO creations.

(When drawing became his job, Mark says he needed a new hobby and chose LEGOS. I especially like his LEGO creation of the pigeon from Mo Willems’ delightful picture book “Don’t Let The Pigeon Drive the Bus.”) 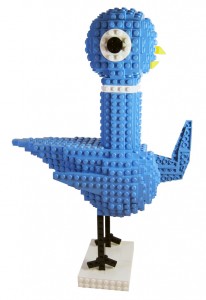 When I gave Mark an opportunity to share something about cartoons with people who work in schools, here’s what he said.

Have you successfully used cartoons in the classroom? Tell us how on the Message Board.

Posted in Expert Insights and tagged value of humor in learning