In my old neighborhood I walked my dog on a secondary school campus that included beautiful athletic facilities that Rover and I rarely saw in use.

Take the stadium, for example. A dozen home football games in the fall, about that many track meets in the spring, marching band practices, the commencement ceremony, the American Cancer Society’s Relay for Life event. Utilization probably teeters around 20 percent of what it could be.

School properties represent the greatest assets of most communities. It would be great to boost use of school facilities in ways that float everybody’s boat. 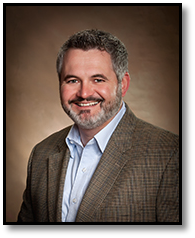 The search for a better way leads home.

In the hunt for ideas to achieve that lofty goal, I made an appointment to see Chris Mundhenk, vice president of marketing and entertainment for the Great Lakes Loons, a Single-A team in the Los Angeles Dodgers’ organization.

And before you sigh, “Didn’t Kym write about professional baseball already this fall?” allow me to explain why the Great Lakes Loons are the perfect poster child for this story.

First, the Loons play at Dow Diamond in my hometown of Midland, Mich., and I drive by often. Even during baseball’s October-to-March off-season, there are cars in the parking lot, even evenings. (In fact, the nation’s first blood donation facility in a sports stadium operates year-round under the third-base stands.) 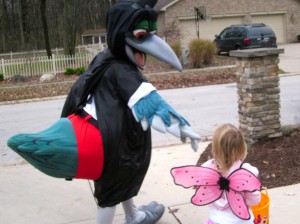 The Loons’ mascot, Lou E, is one busy bird, making 200 appearances year in addition to the team’s 70 home games. No kidding, I went trick or treating with him and the four-year-old winner of a Facebook “like” contest. (In case you’re wondering, Lou E Loon went out dressed as Batman.)

The Loons are also perfect for this story because the team and Dow Diamond operate as one under the auspices of the Michigan Baseball Foundation, a nonprofit organization that exists to drive regional economic development and support youth organizations through partnerships and grants to youth programs.

The foundation has awarded more than $1 million the six years the team has existed. 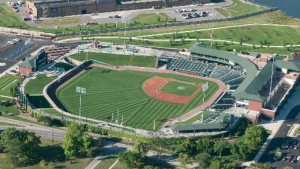 “Because giving back to the community is central to our mission,” said Chris, who’s been on the job since the Loons’ 2007 inaugural season, “we’re strategic about how we use our facility.”

The ballpark is “customizable”  for special events, which grow in size and number every year.

Make it a community thing.

Three to six large events and scores of private parties are held at Dow Diamond during the off-season. (A website voted it the nicest ballpark in Michigan and I get that. Is there another ballpark with a fireplace? Dow Diamond has two, in addition to outfield fire pits.) Dow Diamond hosts high school proms, holiday parties and wedding receptions — many catered by the Loons’ own food service staff. 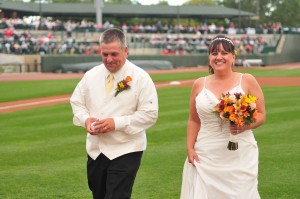 Couple ties the knot at Dow Diamond, then throws out the first pitch.

The team itself sponsors an October beer-tasting event featuring crafted brews from a dozen Michigan breweries. 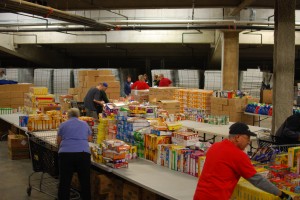 “Science of Baseball” science fairs have paid out cash prizes of $5,000 per year.

Some events – like a January indoor sidewalk sale and a February boat show – are possible in this northern clime only because the foundation had the foresight to have Dow Diamond designed so the concourse can be enclosed with glass doors.

A stadium, a baseball team, why not a radio station?

The foundation also purchased a Saginaw classic rock radio station in 2008, constructed a broadcast studio in the suite level of the stadium, and launched WLUN 100.9 FM in an ESPN format with syndicated programming during the day and state and locally produced sports talk shows at night. 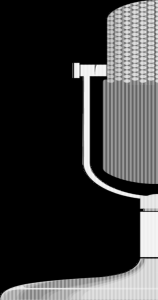 In addition to carrying Saginaw Valley State University and Michigan State University contests, WLUN broadcasts high school football and basketball games – and donates a portion of the advertising revenue back to the league.

Chris said the move created a new revenue stream and a permanent home for Loons broadcasts in one swoop. The station promotes what’s happening at the ballpark and created full-time positions for a few employees who had been working game days only.

The springboard from baseball to special events

The biggest facilities change happened after the 2011 baseball season when the foundation spent almost $1 million to convert Dow Diamond’s third-level press box into the “Great Lakes Reserve,” an area with a wrap-around full-service bar, special dining menu and balcony overlooking the field. The reserve holds about 250 seated guests, or 500 standing guests.

The press area was relocated to an area in front of the radio station booths.

“Now season ticket holders have varying degrees of access to that great space,” during games,” Chris said. “There have been over 100 private parties. Revenue during the Loons home games jumped 200 percent over a year ago because of the Reserve.”

The Loons have experimented with keeping the Reserve open an hour after home games, and opening it for fans to gather to watch high-profile sporting events, like baseball’s World Series, football’s Super Bowl, and college basketball’s March Madness. 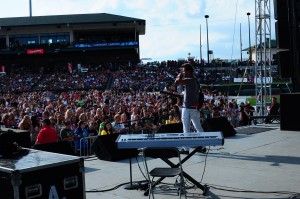 Count on shelling out big bucks to book acts with the star power to draw huge crowds, Chris said. You’ll need an extended period to sell the number of tickets required to break even on a big event. Factor in substantial technical and public safety expenses. As much as Chris likes introducing Dow Diamond to people outside baseball’s typical fan base, he says he thinks carefully about whether the wear and tear on the field will be worth it.

Nevertheless, Lizard Fair may come back someday. Chris is a firm believer in switching up the entertainment, even if an event didn’t lose money. He rotates some in-game promotions to keep the experience of a Loons gamee a fresh for season ticket holders.

(About the only promotion he’s run every season is “Raining Money,” in which a helicopter drops money over the field. Naturally, fans love dashing after the fluttering bills. Once the helicopter pilot found a mechanical problem and canceled the flight just before takeoff. Kudos to Chris for his quick improvisation: Getting interns to blow money off the back of the grounds crew’s John Deere Gators with leaf blowers.)

Students — your ace in the hole for marketing.

Midland is a conservative, family friendly town, so the Loons don’t push the envelope on entertainment. Chris says there’s nothing in his arsenal but Brewfest that a high school couldn’t do to promote off-season use of facilities and – well – boost revenue.

“In this economy, a lot of K-12 districts are trying to do more with less,” Chris said. “More and more you’re seeing schools managing facilities in ways that allow them to bring in additional revenue. High schools on the West Coast get sponsors. It’s not like it changes the name of the team, but you see sponsorship on signage and in in-game promotions.” 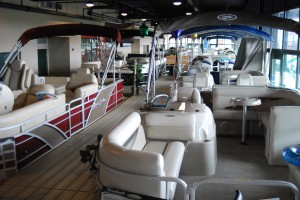 Fifty boats were parked inside Dow Diamond’s encloseable concourse for a trade show. Promoters built a wooden deck around the boats to help spectators imagine they were at the lake.

The main thing Chris wants you to know is that K-12 efforts to more fully utilize school facilities  — whether or not it’s to generate revenue – will be head-and-shoulders more successful if you engage students in a meaningful project to promote it.

“Your students are your brand,” Chris said. “Get the kids involved with addressing school needs, because the school exists for them. Do that and you’ll find answers more effective than any third-party solution.”

Chris is pretty good at tapping young minds, too.

During the 2012 season he challenged students in a sports marketing class at Central Michigan University to find a strategy for increasing the Loons’ social media presence. Students launched a 10-day  “like campaign” on Facebook by offering the carrot that one new friend would win a drawing for an iPad.  That short promotion produced 1,000 new Facebook friends and 500 new Twitter followers, which allows the team to market to fans directly.

Half of the Loons 30 full-time employees started out as interns from area universities. More than 100 interns have cut their teeth on turf management, video production, marketing and food service since the Dow Diamond opened.

In fact, it was interns who came up with the Loons’ signature movement, “The Funky Feather,” a “dance” spectators perform every time the team scores. It was selected minor league baseball’s best in-game promotion of 2009.

Take a moment to watch this Funky Feather video. You’ll get a kick out of it.

I think it’ll also give you a glimpse of how this nonprofit professional baseball franchise works to promote where it lives — Dow Diamond and Midland.