OK.  Maybe it wasn’t the greatest idea to have the first day of “Campaign Tips Bootcamp” right after Super Bowl Sunday, but what the heck? Besides, that’s me – chock full of not-so-great ideas. So I’m hoping that with all of the hullaballoo and attention focused elsewhere today, at least our discussion about election campaigns stays under the radar.

Now, here’s your first campaign test question…and it’s also a brief introduction. Believe it or not, I was on the front page of the Wall Street Journal in 1992. September 1st to be exact. As our nation was heading into the Presidential General Election in November, the newspaper featured an article about high profile and highly paid campaign managers and consultants. In the article, the WSJ reporter also turned the spotlight on a small fry, one sad sack working on a number of state house and local campaigns and earning less than $40,000 per year.

Right from the get-go, here’s what I know for certain: You know your community better than I do. Every campaign (even before it was the proverbial twinkle in someone’s eye…) begins with a dream. And from that dream, a theme begins to evolve, and then people (a team) start to get organized and involved.

Along with lots of other stuff you know better than I, you know your vision. You know your preferred future. I’m just rattling off some tips. Your dream, your theme, and your team are totally yours to think about and create. Who can assess the local landscape better than you? You’re in the best position to understand what it takes to make these three a “comfortable fit” within your own community. I’m not. (If I did, maybe I’d be a high profile and highly paid …)

As I’m building up steam, here are a couple of other things I’m certain of:  #1 Elections are great equalizers. A highly paid consultant gets one vote. Me too. On election day, your bus driver or a person in an assisted living residence each has the same power to decide your fate as does your Chamber of Commerce president. Never forget this. I’ve been in campaigns where we spent an hour trying to secure the support of a perceived VIP when the hour could’ve been better spent with a retiree group or visiting in the coffee shop on Main Street. You do the math.

#2  And given the truth of point #1, also begin your campaign with an “attitude audit.” Here’s why: a lot of people out there like to see the “high and mighty” get their comeuppance. A campaign led by “know it alls” and/or those with “trust issues” is behind the eight ball. Voters may or may not understand the election proposal or its pros and cons, but they sure know what they like and don’t like. So start down the path of showing respect and reaching out to folks without patronizing from day one. Seems simple. It isn’t. Too many election proposal ringleaders can’t get over the fact that they know more about the proposal than everyone else, and then they can’t help showing off instead of showing respect. A friendly approach leads to victory. The arrogant one doesn’t.

A Quick recap thus far: (Is “thus” an arrogant word? Hope not.)
•  You know your community.
•  You know how your “dream, theme, and team” should “comfortably fit.”
•  Elections are great equalizers. Big shots – yes. Little shots -YES.
•  Are you a “know it all?” If yes, find a brand new hobby and campaign as this person.

When is best time to launch an election campaign?

Too many campaigns wait until the official announcement of “the actual campaign” to begin making the rounds and checking in with people. Big mistake. Once a campaign is announced, everyone’s cynicism kicks in and the BS detectors go up. Once a campaign is announced, if you show up at my door or invite me to a special event, I already know why. You want something. Now is the perfect time to also update your active voter lists and community group and media contacts, as well as invigorate your internal and social media networks without making anyone suspicious about your motives.

Get out there and talk to people now. Even if your “dream” is only in pure rough draft form (and it’s best if it is…) get out there with your other school leaders and chat and listen. And be intentional about your “pre-campaign” effort. Phone calls, congratulatory emails, and hand-written thank you notes all have more value “right now” than after the date of the official campaign announcement. As Woody Allen advised, if you can’t be sincere, fake it. Take full advantage of “right now.”

Here’s another benefit of intentionally becoming more visible “right now.” If you and your school leadership team keep track of your visits and contacts, you can say that your eventual election proposal or request to the voters was “grounded in more than 48 meetings over six months – from all across our community – and represents the input of more than 550 people.” You get the idea. Keeping score “right now” allows you to provide the social proof that you’ve been in step with the community all along the way.

And who should you make sure is on your campaign leadership team?

The answer here may surprise you. But I believe you need a knowledgeable and mature person on your campaign team who’s always “pushing back.” If you are a leader in a position of authority, you already know the individuals who always say “yes” to you. If I had this at home or work, I’d enjoy it, too. But mix it up a bit. You need a key person on your team who is encouraged and invited (by you) to be free to express when needed, “Hey, team…we’re gonna lose this election unless we ….”

Elections are won and lost. Yes, you need “yes” people, but you also need a trusted and thoughtful “no” person in your tent, too.

In closing, you know where you’d like your organization to be. You also know how your community likes to hear about your plans. And with respect to some future election down the road, you’re either making good use of “right now” time or you’re not. Be mindful of all the “little people” as well. Don’t buddy up to a crank or the town pessimist, but begin courting a knowledgeable “no” person.Your attitude shapes your campaign. Be nice.

Tomorrow we will cover the ONE thing every winning campaign has. I guess the answer could be a “high profile and highly paid” consultant – but I’ve got something different in mind. 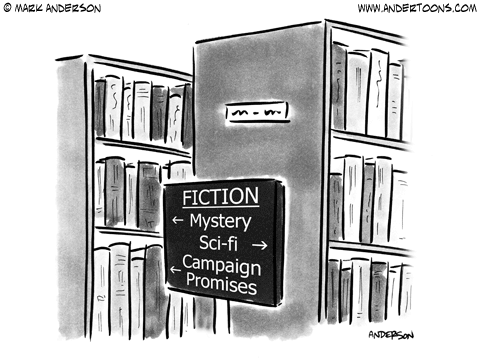