Oh, oh. I just heard the word “stupid” on the radio.

As you read this, please understand that this particular “Encourager” was a struggle for me. Here’s why:

Given today’s topic and example, I must occasionally use the word “stupid.” And this isn’t easy for me.

I grew up in the Flint area in a home where saying the word “stupid” was simply not allowed – ever. All the way up through my middle school years – and despite the reality that my three younger brothers really were stupid – I was regularly “dis-incentivized” by my mom whenever I pointed this out. (And let me tell you, a wooden spoon was built to last back in those days. My mom used hers as one effective hands-on, minds-on instructional device, believe me. No software updates or charging stations were required.)

So I’ll muster up some courage and use the dreaded s-word – just for you.

Last week at a gathering of GOP governors, Louisiana Governor Bobby Jindal was the keynote speaker. It was reported that he told his audience that in all future appeals for voters, “the Republican Party must refrain from becoming the party of stupid.”

In listening to this expression on the radio, I hoped that the remaining news report would avoid drifting into the predictable left vs. right rift. Because if I was going use the word “stupid” in a message to you, I didn’t want it to be in the form of some lame political commentary. (What’s encouraging about that?)

Think of any group you’re a member of.  You face the same challenge Barbour bemoaned. That when someone “in your group” says or does something stupid in public – it weighs down your own positive messages and momentum, too. You’ve just been tossed an additional bag to carry.

For school leaders and communicators: the one bad example, the most improbable of situations, or the most stupid thing said or done by a person “in our group” is rarely hidden anymore. The specific incident may have occurred in another state, but it can still force us to play defense.

I’d say that this reality is not fair and really stupid – but I won’t.

I need to get back in my mom’s good graces. She actually used her wooden spoon to make cookies about 98% of the time. And they were delicious. So I’ll watch my words and reap the benefits. 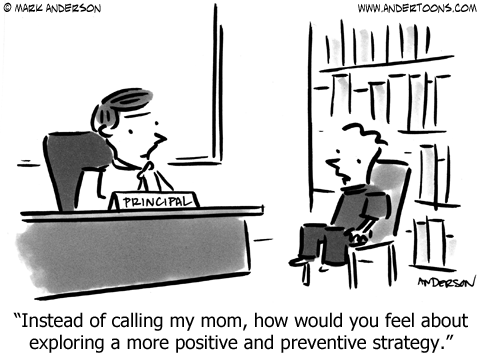