I’m way late to the MacGyver party, but something technology integration specialist Kevin Honeycutt said compelled me to arrive.

MacGyver – for those of you who, like me, didn’t watch much TV from 1985 to 1992 – was a secret agent in an action-adventure TV series who “invented” his way out of tight spots with whatever objects were at hand.

His science-not-violence approach took root in popular culture. Now you sometimes hear MacGyver’s name used as a verb (“The thingy broke but I MacGyvered it.”). MacGyver also regularly surfaces in rap lyrics. My favorite is Don Trip’s “Vent.” (I’m the soul provider. Tryna make something out of nothing like MacGyver.”)

Kevin is one of the world’s most popular and entertaining speakers on the subject of teaching with technology, but his message forges deeper than the bells and whistles of shiny new gadgets.

“In education, we’ve got to be MacGyver thinkers to steer clear of the icebergs that could take us down,” Kevin told me. “Every kid counts, especially in a poor economy. We’ve got to engineer our own survival.”

His MacGyver tendencies began at an early age

Kevin was yearning for a place to call home after college. He was raised in a poor, transient family and his childhood was peppered with times he used his wits to overcome a hardship. He attended 20 different schools en route to becoming the first person in his family to earn a high school diploma. Imagine how he felt graduating from college!

Kevin vividly remembers the sweltering summer day he arrived in Inman, Kansas to interview for his first teaching job because the town looked deserted.

A job offer was readily extended, the excessive heat subsided, and neighborly Inman (1,377 residents strong) ventured back outdoors to offer proof positive to the new art teacher that he’d landed in a fine community.

But being small (450 students in grades K-12) imposed resource limitations that Kevin says he had to MacGyver his way around. (Not that you’ve ever had resource limits!)

“As the only art teacher in the district, I was responsible for providing the only fine arts education our students might ever have,” Kevin said.  “Talk about pressure.”

Technology was the vehicle that allowed Kevin to inexpensively bring more resources to his students.

It wasn’t easy. Kevin was teaching a class in black and white photography, but – since almost nobody in the real world develops in a dark room anymore – he took the initiative to teach himself to use PhotoShop. He says he was challenged to upgrade his technology skills to prepare kids for their future.

Did you know that it’s possible to take virtual field trips of many of the world’s great art museums?

Kevin also developed a video podcast series of 10-minute drawing lessons called “Art Snacks” that kids can use between formal art classes to develop their skills – or just have fun.

In the 13 years he taught before becoming a specialist at ESSDACK (Educational Services and Staff Development Association of Central Kansas), he also had students researching, writing and filming public service announcements on state history, filming their interviews with World War II veterans, and making commercials for small businesses.

The fondest memory Kevin has of his early days as a trying to survive art teacher was working with students to create a movie riffing off a legend that their high school is haunted by a female student who died after the 1932 prom.

The movie was shot on a wafer-thin budget on equipment that was crude, even back then, but Kevin doesn’t set himself up for failure by aiming for Steven Spielberg quality.

[pullquote]“You don’t need to be great at everything,” Kevin said. “You just need to start.”[/pullquote]

The backstory behind “The Ghost of Inman High School” is that the drama program was a whisper away from being eliminated in budget cuts because of low participation. When there are only a couple of hundred students in your junior/senior high school, sometimes there’s not enough talent remaining after sports teams are filled to pull off a theatrical production.

Doing a movie, rather than a musical, allowed Kevin to multiply the contributions of a small cast and crew. Students got the experience of acting, costuming, performing music and creating sound and visual effects.

Kevin also tapped community resources for the production as a way to sure up support for his drama program. Community members donated antique automobiles and other props for the movie. An aged alum of Radio City Music Hall’s precision dance troupe, the Rockettes, came to school to teach students to waltz.

“Hutchinson Goes Hollywood” was the newspaper headline when Kevin reserved The Historic Fox Theater in nearby Hutchinson for the red-carpet premiere of “The Ghost of Inman High School.” The theater seats 1,221 and Inman filled it – stunning when you realize that means practically everyone in town attended.

Imagine the MacGyver theme playing as you ponder what resources are available in your community to increase access to learning experiences for kids.

What devices could your school district use to improvise a better education? What would you recommend?

Kevin now wrestles with these issues as a member of the Inman Board of Education, attending many meetings via Skype because he travels the world coaching teachers, giving about 270 presentations a year.

Inman moved to a one-to-one program with iPads a couple of years ago. “They just make everything easier,” Kevin said. 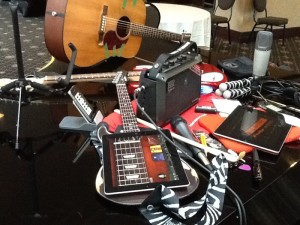 The Inman board is considering ebooks as a more affordable alternative to textbooks. There’s also talk of opening a “virtual” school to boost Inman’s meager enrollment with online students who live outside the district.

“These are tough times to be a leader if you refuse to sacrifice quality,” Kevin said.

Leaders like him give all of us confidence that we will be clever enough to MacGyver our way out.

And this is just Part 1. Just like in a late night infomercial, there’s more! Return next week to read Kevin Honeycutt’s straight-up advice for schools on using social media.