What do those millions of tweets tell us?

Maybe it’s just me… but it seems like Twitter is in the news a lot more than Facebook recently. Articles highlighting Twitter’s simplicity, flexibility, and search capabilities give the impression that Twitter’s explosive growth will not peak any time soon.

I’m no Twitter expert but I find this topic fascinating. Dan Zarrella writes in his book “The Science of Marketing” that he has researched several million tweets. (Now I know why I’ll never become a Twitter expert …I’d need to buy a “5 Hour Energy Drink” every 299 minutes.)

But you’ve got to give Dan credit. He churned up some interesting facts about how we’re all tweeting.

Dan Fact #1:  You can stop tossing and turning late at night worrying about if you’re tweeting too much. Apparently it’s impossible to over-tweet. Dan’s research says that there is no “discernible drop-off” in readership until hitting the 22 tweets per day mark. He stresses that you shouldn’t send out all 22 of your tweets in one hour (… almost directly challenging school communicator to all try this!). So just send out one or two tweets per hour as people are reading them 24/7.

Dan Fact #2:  People typically tweet out original thoughts (what’s this?), a link (to an article, photo, or video), or a quote. Readers by far prefer to retweet tweets that include a link of some kind. Quotes and original thoughts (what’s this?) are not retweeted as often. They are perceived as saying, “Hey, notice me. I’ve got nothing valuable to share, but here I am.”

Dan Fact #3:  In your tweets, do you ever ask for readers to retweet your tweet? If you do, Dan’s research says to use the word, “please.” The success rate for “please retweet” is about 50% higher than a basic RT or Retweet request. Like I said, I’m no expert, but I’m guessing the same logic applies when asking for a pay raise. “Please raise pay” is better than “RP” or “RaisePay.”

Dan Fact #4:  In his research, Dan translated two “linguistic analysis systems to the micro-blogging platform.” I had no clue what this meant (that’s a fact) but I kept reading anyway. I know you’re depending on me. Dan described using “Linguistic Inquiry and Word Count (LIWC) and Regressive Imagery Dictionary (RID).” After first checking to see if any of these were contagious and covered under Obamacare, I think this means that tweets using the words “I, me, we, and us” are read less than tweets that rely on the word “you.”

Dan Fact #5:  Positive tweets are more popular than negative ones. Nobody wants a steady dose of “downer tweets.” UNLESS (and you knew there had to be one coming…) UNLESS the tweets are about “bad news” we already know about. For example, lots of people intently followed the flow of tweets out of Boston. They were already engaged and interested. They didn’t consider these tweets as negative.

Dan Fact #6:  Want to be followed on Twitter? Beef up your 160 character Twitter bio. Dan says that most people don’t do this – and when they do – they compose incredibly boring bios about themselves. People who are unafraid to spotlight their accomplishments get the most followers. (So as we all rush to pump up our uninspiring Twitter bios…know that I’ve already claimed “buff & independently wealthy” for mine.)

Dan Fact #7:  Does the time of day influence what we tweet? Dan says that it does. We write our original thoughts (what’s this?) in the morning. As the day winds down and we get tired, we resort to retweeting. We’re just too pooped to think up stuff.

Dan Fact #8:  What words are the most valued to Twitter readers? Dan discovered a shocker or two. Here are the words: Free (not a shocker), Check out…, How to…, New blog post…, Social…,10 (yep, the number), Top…, Post…, and Please.

I’m relieved that my name didn’t pop up on the list of Twitter “turn off” words and phrases. I kept my fingers crossed. Not that it would’ve caused me to change my new Twitter bio, though. 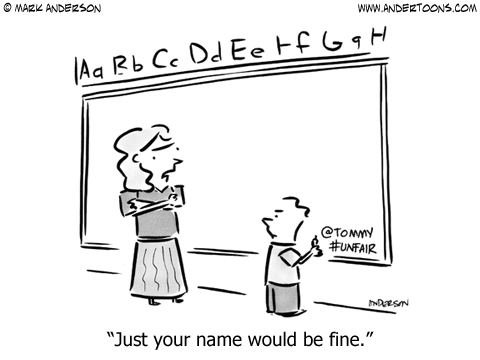