Finally! A litmus test that measures how connected a school communicator is to his or her community.

Here it is: How many cupcakes could you get donated for a spur-of-the-moment event? 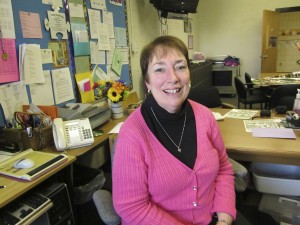 Kathy Gomez, communications director for Coopersville Area Public Schools in Michigan, passes the cupcake test with flying colors. She got all 6,000 cupcakes she needed for a surprise birthday party, even though the celebration was for somebody nobody knew in a football stadium at the stroke of midnight.

The party was for actor Brian Presley (I remember him as the hunk from the soap opera “Port Charles”), who on Aug. 18, 2010 – his 33rd birthday – was filming night football scenes in Coopersville High School’s stadium for the feature film “Touchback,” a fantastical story of an injured football player who gets a second chance at athletic success. 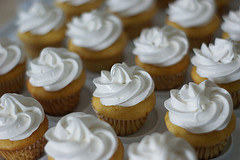 “When it’s your birthday, you bring cupcakes to school,” Kathy, commandeering the P.A. system, announced to the movie cast and crew and a stadium packed with volunteer spectators.

As Kathy talked about the bouncing baby boy who entered the world in 1977 on the same day The King of Rock ‘n’ Roll Elvis Presley left it, Coopersville food service staff pushed carts laden with cupcakes into the stadium and served every last person with a smile. 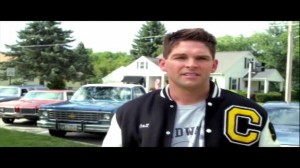 So, how did Kathy, who lives in a community with 4,300 people, get 6,000 cupcakes donated with just a couple days notice?

Phone calls to commercial bakeries yielded donations of about 250 cupcakes. She got the rest by sending out emails to school staff, boards she’s served on, area churches and neighbors.

Either a lot of people owe Kathy favors or she’s intricately tapped in to her community.

“I didn’t get compensation, but I’m listed in the credits and I did get a complement from the director (Don Handfield),” Kathy said with a chuckle. “He said he’d like to take me back to Hollywood because I know how to get things done.”

Forget Hollywood. We need her here.

The many and varied functions she performed for the “Touchback” crew – scouting filming locations and negotiating their use, finding props, organizing crowds, finding volunteers, and translating Spanish to English – pale in comparison to her responsibilities with Coopersville Area Public Schools. 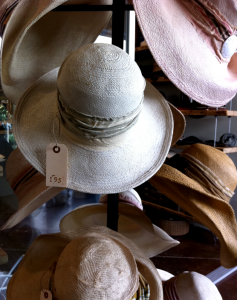 Kathy, a nurse by training, was hired by the school district in 1986 to serve as its director of migrant education because she knew enough Spanish to speak with families who came to Coopersville to pick apples or work for dairies. (Kathy is not Latina, but learned Spanish so she could converse with members of husband Jose’s family. Nevertheless, she says the lives of migrant children resonate with her. Her father oversaw operations in several states for Gulf Oil, so she had attended 13 schools by the time she graduated from a suburban Minneapolis high school in 1973.) 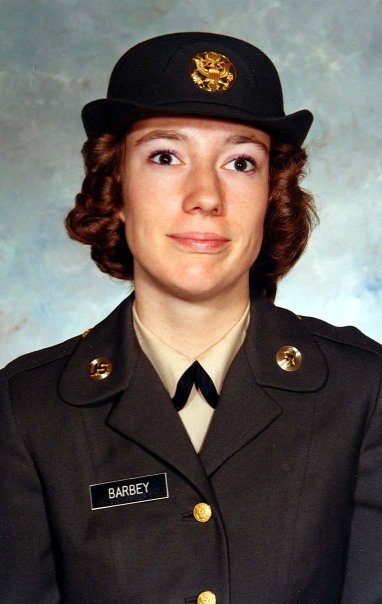 Kathy received her nurse’s training in the Women’s Army Corp. She met her husband, Jose Gomez, at Landstuhl Regional Medical Center. He was one of her instructors! The couple has three adult children.

Because of her nursing background, Kathy was picked to organize a Crisis Response Team that kicks into high gear whenever a tragedy impacts the school community. (Unfortunately, their services have been needed for murders, house fires, and traffic deaths.)

Kathy, who served on the North Ottawa Council on Aging’s Board of Directors for nine years, continues as the school liaison to “Old Kids,” a senior recreation program.

She also teaches country line dancing (and the YMCA, Cupid Shuffle and Electric Slide) after school twice a week as a fundraiser for the migrant program’s Unmet Needs Fund, which provides a lot of winter clothing.

Last but not least: Communications director

Kathy became the district’s communications director in 1990, after superiors noticed she liked taking pictures for “Show and Tell,” the district newsletter. She appoints an employee in each building to collect stories for the newsletter, now titled “Bronco Bits,” and upload them to a share drive. She reserves space in each issue to promote Old Kids and public library programs to keep readership strong among residents who don’t currently have a child or a grandchild attending district schools. 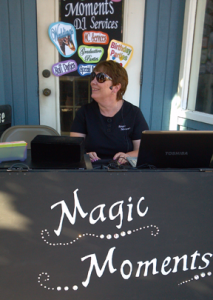 Knowing it would save the district money on typesetting, Kathy learned desktop publishing to layout the 32-page newsletter herself. Bronco Bits is published seven times a year. And, yes, she affixes mailing labels.

“I’ve suggested that we publish online, since the cost of mailing each issue runs about $750,” Kathy said. “Online I could publish more often and stories would be fresher, but our superintendent and board aren’t ready to take that step. Our community does look forward to the printed newsletter in their mailboxes.”

With traditional news outlets floundering financially, Kathy also serves as a community correspondent for a Grand Rapids television station’s website. She doesn’t get paid, but Kathy loves getting Coopersville’s good news out. She uploads her stories and pictures to the website, then Facebook-posts and tweets links to the story.

“That’s how good news goes viral,” Kathy said. “In the digital world, you have to hit on things right away.”

Kathy said she’s able to function in divergent roles because of building correspondents for the newsletter and because her migrant education staff and her crisis response staff operate like well-oiled machines. When her attention is pulled elsewhere, colleagues pitch in to get the work done.

She says it’s easier for her than it probably is for other communications directors to stay connected with people throughout the organization because Coopersville schools share a single campus. Her longtime leadership in migrant education (she now has students of former students!) also helps bring into the fold a sector of the community that is sometimes “invisible.” 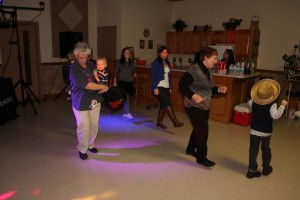 Kathy Gomez teaches country line dancing after school twice a week for $1 per session as a fundraiser for her migrant program’s Unmet Needs Fund.

The afternoon I interviewed Kathy, a student dropped by her office to pick up a pint of chocolate milk, which she provides as a nutritious alternative to soda pop.

The student’s grades had been slipping so – as is her custom – she told him she would be coming to his house for dinner next week and to relay to his mother that she likes chicken.

“If his grades don’t improve this week, sure, I’ll go,” Kathy said. “It only takes one meal to stop the slide.”

How, I asked, did the student know she wasn’t just blowing smoke?

And then Kathy explained that she drives every morning to the migrant camp where his family lives to pick up his sister and her baby. Kathy said she persuaded a daycare center to accept the baby on scholarship so his mother can attend school, but she can’t ride the school bus because it can’t accommodate the infant’s car seat.

That story made my jaw drop. (I extend myself for people, too, but rarely before 7 a.m.)

[pullquote]Kathy says she still wonders how she became the “go-to gal” the month “Touchback” was being filmed in Coopersville, but that “exhilarating and exhausting” experience did coalesce and showcase her divergent gifts in ways that went way beyond cupcakes.[/pullquote]

One time that the crew asked her to produce 40 high school “extras” with 20 minutes notice, which was impossible because labor laws require minors to be accompanied by a parent.

Fortunately, Kathy had the connections to get enough first- and second-year teachers and recent Coopersville grads together to make the scene work. 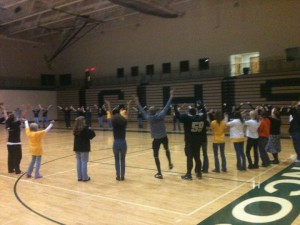 When rain delayed filming of a night football scene, Kathy brought out her music and taught YMCA and other dances to put movie extras in a better mood.

An intern on the set got word that a friend had been killed in an act of violence and grief left him unable to function. Kathy switched into crisis mode, helped the young man understand his body’s response, and arranged for him to have time off.

The set designer suffered a stroke. It was Kathy who visited him while he recovered in a Grand Rapids hospital.

Rain forced everybody inside during one overnight filming of football scenes. Presley and co-star Kurt Russell had trailers where they could wait out the storm, but most members of the cast and crew – and hundreds of people playing spectators – took shelter inside the Coopersville High School gym.

So, at 3 a.m., Kathy, pulled out her Magic Moments music. She gathered together as many people as were willing and started getting them to dance. Music soothed a surly crowd. Could it be her own sleep-deprivation that leaves her imagining she may have saved the gym from destruction?

Let the record show that dancing got everybody through the tough rain delay. 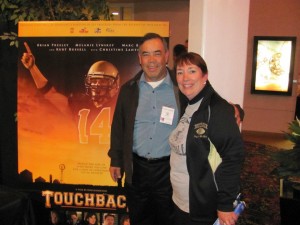 Jose and Kathy Gomez at the “Touchback” premiere in Grand Rapids.

When “Touchback” was scheduled for release in April 2012, the distributor chose not to release it to Michigan theaters. Kathy was instrumental in persuading the company to allow a premier at Celebration Cinema North in Grand Rapids, where it filled two theaters.

“I take pride in not setting limits,” Kathy said. “If you don’t limit yourself, doors open. That allows you to connect things.”

So, can you suggest a measure other than cupcakes that show how effective a school communicator is? Go to the message board and tell us all about it.
Posted in Expert Insights and tagged community relations, crisis management, handling diverse roles, public relations