This summer, I rediscovered a passion that I hadn’t experienced since being a kid: biking. With the encouragement of my son and the realization that my knees started to hurt more from running, I yielded to two wheels. So, I bought a “new” used racing bike. This is the kind where you wear the snap-in shoes. And yes, I learned the hard way that you gotta snap out of ’em when coming to a stop. My scabs are ample evidence.

With this renewed love for biking, my antennas are up on all biking-related articles, news, and of course, the Tour de France. One such article caught my attention – an article that was more of a confession than anything else. The writer admitted to doping while competing as a heavy duty cyclist. He pointed out that he was an accomplished cyclist in his early 20’s, and he was about at the 98th percentile of all elite bikers. What he needed was that extra two percent. So, with a little “encouragement” from his coach, he succumbed. As a person now close to 50, it’s a decision he regrets to this day.

Which brings me to the more current news of the day: Lance Armstrong. Recently, Armstrong made the decision to forego his challenge to the United States Anti-Doping Agency (USADA). This is especially tough, considering his record of seven consecutive Tour de France victories. Now, they’re just a void. More importantly, one wonders if his leadership in championing the fight against cancer was little more than a ruse.

I found it ironic that Lance’s former girlfriend, Sheryl Crow, offered the following comment long before this scandal ever broke: “There’s a lot of integrity with musicians; you really still aspire to grow, and be great, to be the best version of yourself you can be.”

Maybe, Lance should have stuck with Sheryl a bit longer. 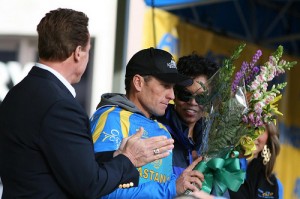 Hopefully, Lance Armstrong’s situation prompted some thinking in all of us or at least, some meaningful talk around the dinner table.

Integrity is tough work. It’s a daily walk burdened with considerable tension. To be honest, I have to think about this myself for a while. Maybe a bike ride will help. On second thought, I’m going for a walk instead.