Every writer longs to snag “the big interview” and tell a compelling story that enhances his or her standing in the communications field.

Communicators with these aspirations are out there, in all domains, and you might be surprised what I learned from golf writer Terry Moore. (And full disclosure here: I’m a former sportswriter, so I’m a believer in the life lessons offered through sports.) 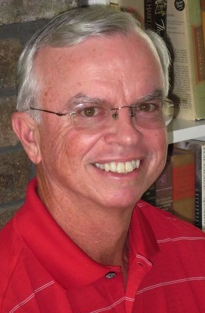 Terry left a successful tenure as public school administrator in 1982 – at a time when his home-state of Michigan was leading the nation in the number of new public golf courses – to become the founding editor of Michigan Golfer magazine.

Can an educator make the shift to a career in golf?

Over three decades, Terry used the magazine as a springboard to launch a long-running consumer golf trade show, a radio show, and a TV show. He also organized marketing events to draw members of the media to golf courses and he’s a contributing writer to “The A Position,” a network of premiere golf writers.

Along with the long-running Buick Open in Flint, Michigan, Terry’s efforts helped bring major PGA personalities to his home state.  His dedication to popularizing the game resulted in his induction to the Michigan Golf Hall of Fame in 2011.

Effective promotions grew from Terry’s personal passions. He said his love of golf was kindled in boyhood by parents who played the game. He grew up a bicycle ride away from a 36-hole public course in Youngstown, Ohio, and started caddying and studying how the game is played when he was 10 years old. Knowing the game inside out produced keen observations for his column, “A Slice of Life.” 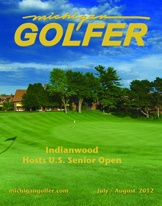 Find the place that enhances your success.

[pullquote]“You have to be willing to move into areas that have not had a strong media presence for the kind of thing you do,” Terry said from his home in Grand Rapids, Mich. “The best advice I can give to someone early-on in a career in communications is to remain flexible and to remember that it’s rarely wrong to over-communicate.”[/pullquote]

Terry said he knew Michigan Golfer needed a high-profile celebrity cover story for its launch in 1983, so he pursued an interview with former President Gerald R. Ford. 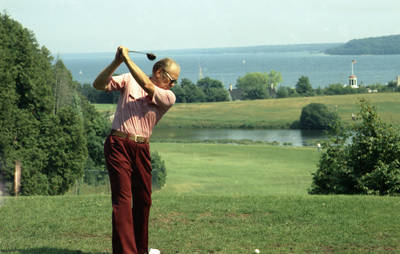 Ford famously described his own game as “combat golf,” but Terry believed a story about the Michigan-born president as golfer would spur reader and advertiser interest in his new magazine.

The former President was not unwilling, but his calendar was full. Terry says he got the interview in time for Michigan Golfer’s debut issue because he sent a hand-written personal note asking for only 30 minutes of the former president’s time, and was willing to fly to Colorado to wait in Ford’s office until the former president could work him in between scheduled appointments.

Being flexible also made Terry’s story with Greg Norman possible. The golfer’s agent and the tournament organizer’s media team were not able to guarantee reporters a sit-down interview, so Terry conducted the interview between shots as he shadowed Norman for four holes. 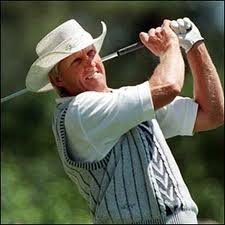 As readership for the Michigan Golfer continued to grow, Terry made sure to promote benchmark events. For the magazine’s 10th anniversary cover, he assigned a freelance photographer to secure a photo of golfing legend Arnold Palmer reading an issue of the Michigan Golfer. The photographer stalked Palmer for five holes before he could hand him the magazine and snap a photo.

Unfortunately, that plum cover photo morphed into a nightmare for Terry as he ordered the headline over the photo to read: Must Reading For the Chairman of the Board.

Oh, oh!  The “Chairman of the Board” is Frank Sinatra’s signature tagline, not Arnold Palmer’s! Readers quickly caught Terry’s “yip” and razzed him about it. Luckily, Terry’s good humor lets him chuckle now chuckle about this. 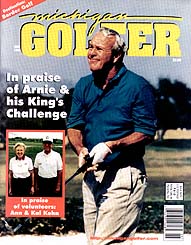 School communicators can relate to the lack of a big budget.

“Regional magazines have small staffs, not unlike the limited resources available to school communicators,” he said. “There’s very little specialization. You have to do a lot with a little. And you might actually have to cover every phase of the operation. So there will often be that one thing that gets by you. Just keep going.”

The Michigan Golfer today is now an online publication only. And Terry is no longer an editor but is a featured blogger. His “All About Golf” radio show and “Golfing Michigan” TV show had long runs that have ended. 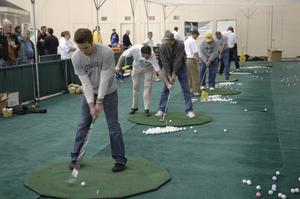 The West Michigan Golf Trade Show celebrates its 25th anniversary next year, although he decided to sell it after 13 years to ShowSpan Inc., which organizes several large consumer exhibitions held in the area.

Terry has nurtured a good career by building a solid reputation in a very competitive niche market. The keys for him: flexibility, creativity, a love for laughter and people, and affection for good writing.

And don’t forget about teamwork! “My wife Deb and I enjoyed the coordination and planning, whether it involved a print enterprise or a trade show, but it was all-consuming,” Terry said. “Deb was instrumental to our business growth, and we both knew when it was time for us to scale back.”

Terry still appreciates all of the work that goes into event planning. “While promotions now require a more intricate mosaic of traditional and social media tactics to generate buzz, there are other factors that will always have great impact,” he said.

Like this one — the calendar! “You’ve got to be cognizant of what else is on your community’s calendar,” he said. I’ve learned that the greatest golf show can’t compete with Easter weekend or even playing golf itself on a nice warm day.” 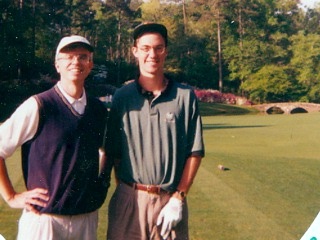 Golf writers Terry Moore and Michael Whitner during The Masters Tournament at Augusta National in 1995.

In accommodating this fact, Terry began holding his annual golf show in holiday-free late February; timing which encouraged attendance growth as Michiganders were sun starved and sick and tired of seeing snow on the ground.

So, birdie or ace?

Today Terry is leveraging his quick wit and wide experience as a contracted sports marketing consultant and golf writer. He’s covered the “The Masters” 29 times, for example.

“In my career, I’ve been able to write about – and keep writing about – the various facets and the fascinating people all connected to a game I love. How fortunate is that?” he mused. “Plus, Deb and I have been able to travel together extensively. I’m penciling in an ace on this scorecard.”

How important has flexibility been in developing your career and why? Tell us on the message board.

Posted in Expert Insights and tagged career development, getting the big interview, hobbies