You’ve endured enough – as I’ve presented my various “learnings” all last week gleaned from the Agents of Change 2013 conference.

Thanks for your patience.

I’ll do my best to wrap it up.

Remember the Encourager featuring speaker Chris Brogan? It must have been okay… I haven’t heard from his attorney yet.

I came to Portland seeking answers and how to’s. Brogan started off by asking us if we knew the difference between dumb and stupid. (Dang it. Isn’t there an option somewhere in the middle?)

Brogan’s point was provocative – and I won’t repeat it here since you have the link – but in re-reading Daniel Pink’s book To Sell is Human, it struck me that Brogan’s perspective was also anchored in a solid principle.

Pink’s research reveals that the most successful people are typically those who ask the right questions with the intent of solving the right problems.

Ask the right questions. Identify the right problems. Then create the right solutions.

I wanted answers handed to me right from the beginning without the “asking” and “identifying” steps. Oops.

• John Lee Dumas to my rescue 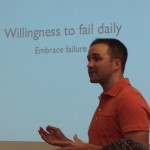 Luckily, I was at the perfect conference where “working through every failure” was a common theme.

John Lee Dumas of Entrepreneur on Fire even stressed that “embracing failure” is critical to your forward movement.

Maybe someone who doesn’t have any failures to work through wouldn’t find John Lee’s message so inspirational.

But for me – I couldn’t imagine a better presenter.

Now I just have to determine which failure I should embrace first?

• Jaime Tardy to the rescue of John Lee Dumas

In one last week’s Encouragers, I described the success of John Lee Dumas’ daily podcast program. 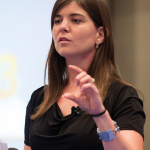 John Lee would the first to admit that if he hadn’t hired (invested in) Jaime Tardy from the get-go, his ascent in the podcasting domain might not have occurred as rapidly as it did, if at all.

Jaime is a seasoned podcaster and her show (which started long before John’s) ranks right up there near his. He was wise to pay her to show him how he could gain from her in-the-trenches podcasting fizzles and sizzles.

John Lee had a great idea for a podcasting program. He is intelligent and hard-working. But this wasn’t enough. Early in his business development process, he accepted Chris Brogan’s advice to be the “dumb person in the room” and ask the right questions and seek out assistance… and Jaime Tardy helped him create an enterprise in one year’s time that is now netting about $50,000 every month.

• Jaime’s husband talked to me about school

To be honest, with all of the on-stage interviewing that Jaime was handling, Jaime only had about three minutes to talk to me. But little did she know, that in a school communicator’s world, 180 seconds is about all the time we usually get from a busy teacher, principal, or superintendent.

When she told me “I really need to be over there doing that right now” it wasn’t something I hadn’t heard before.

But Jaime was very gracious when I asked about her high school days (“Oh, dreadful.”) and said that she’d look forward to scheduling a follow-up conversation with me.

I met her husband, Matt, when I introduced myself to Jaime.

From listening to Jaime’s podcasts, I knew Matt was a talented professional stage performer (juggler, musician, and physical comedy) and that they had several young children.

As Jaime scurried off, Matt asked me if he could share a school concern.

“Sure,” I replied confidently, hoping that the concern had nothing to do with technology.

“Jaime and I are a little worried about our first grade daughter,” Matt said. “She’s been in school for all of about ten days now. Every night she brings home math and reading homework and we see her turning into a little worker bee. We don’t see a joy for school… or affirmation for creativity… or even hear her talk about just playing with new school friends. We’re already starting to think about alternatives, including homeschooling, because it hurts us to see what  school is doing to our daughter.”

I told Matt to talk to his child’s teacher and principal. I know this is our stock answer for responding to a parent, but I asked him to give it more time, and to explore where the “little worker bee” push was coming from.

“I don’t know a single educator who wouldn’t empathize with what you just said, Matt,” I replied. “Your child’s joy for learning and her creative spirit are important to every teacher and principal I know. But it’s a struggle for us when the people who mandate what our schools must do have very different priorities.

“Whatever you decide, see if you can first find out where the educators in your daughter’s life stand. I’ll bet they agree with you 100%… and could use your support.”

Jaime and Matt Tardy seemed very much like the many good young parents we all know in our own districts and I’m eager to schedule that longer visit with them and write about it.

Also last week I shared in an Encourager what I learned from Mike Stelzner, the founder of the Social Media Examiner. 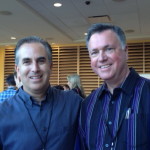 Beyond having the grace to have his photo taken with me, Mike had the resilience to bounce back from flop after flop through the years, and today, his business nets him more than one million dollars annually.

My chat with him had nothing to do with money acquisition and management (no surprise here), but had everything to do with the fact that we are both the fathers of three daughters.

And yeah, despite my girls being about 12-15 years older than his, we had a lot in common as dads.

We love our daughters dearly, and like TV channel TNT says in its ads, “we know drama.”

Here’s what shocked me about Mike’s presentation, as he and Jaime Tardy were talking on stage together.

During his remarks, Mike announced that he was going to take his financial resources (all that he’s earned in the online / social media sphere) and bankroll a new website called “MyKidsAdventures.”

While it’s on the web, it’s totally un-techy. It’s free. And it’s all about all about helping families plan OFF-LINE real-life adventures together and create memories that will last forever.

This link will take you to MyKidsAdventures and an introductory two-minute video from Mike that explains the “why” behind his heartfelt commitment.

The format Mike used in his video could be a model for some of your school videos… and, of course, his MyKidsAdventures site is a great one to link up to your own district website as another beneficial resource for parents if you have a “parents links” section.

But, what impressed me is Mike’s total “all-in” charge forward with his new start-up.

He’s already got a great gig going, but he knows there’s something better.

Sometimes I’ve got to simply give kudos to a good dad – and appreciate those lessons as well.

Leaving Portland with scraps of notes in my pockets & jumbled thoughts

Naturally, I have one last tidbit to tell you about.

Did you know that Portland, Maine, is the home of the very first donut? 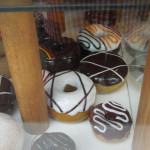 Apparently, an unnamed revolutionary war baker (Duncan maybe?), was frequently frying globs of batter, and he could never get the middle to keep from getting soggy. So he solved this problem by digging out the centers portions of the frying globs and just throwing them away.

Because of its unsurpassed history with donuts, you’ll often see in Portland’s shops displays of donuts (like the ones in my photo) made out of stones, jewels, and clay.

They are amazingly realistic – and they made me hungry. 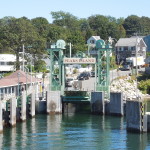 We were told that a nice little bakery was located in Portland’s Peaks Island, which was about a 20 minute ferry ride away.

Although there are about 10 shops and four restaurants on the island, and there’s only this one pastry and coffee shop… everyone said it was well worth the trip.

So Cindy and I made a plan for when we got to Peak’s Island: Enjoy the day. Walk around awhile. And then go enjoy a donut after we’ve had a bit of exercise. 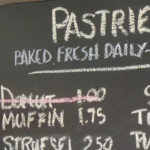 I was huffing and puffing more than I would’ve liked, but we worked our plan to perfection.

And can you believe this is the sign we saw when we finally walked into the bakery? (And it’s only bakery on the island?)

I can take a hint. 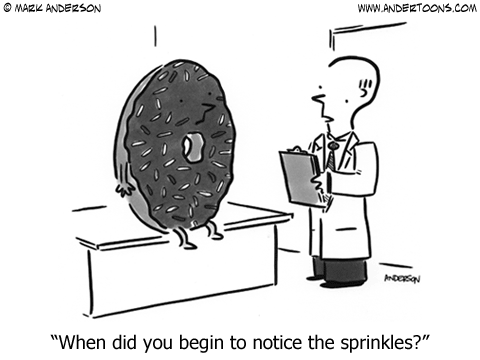