You won’t read this article.

It doesn’t matter that you may learn things to help you be more effective.

You work in a school district, so you’re trained on what your state and the feds decide kids should know. If the stuff on the test hasn’t been taught before students take it, scores will be pitiful and your school could be branded as “failing.” School funding and your job could be affected. What’s on the test is all you have time for.

That’s why you won’t take time to read about ideas that could inspire more actual learning. You’re just too busy. 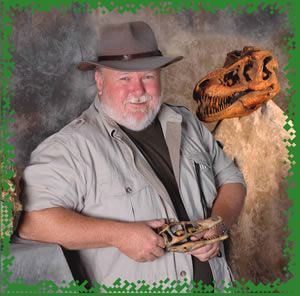 I got this grim message from Joe Kchodl (pronounced KOH-dill), who for 20 years has dressed like Indiana Jones to lead school assemblies on fossils as the “dig science!” character “PaleoJoe.”

PaleoJoe does makes 120 appearances a year – about half to second- through sixth-graders in schools and half to audiences of all ages in public libraries and museums. He writes a “dinosaur detective” adventure series for children. He has three traveling museum exhibits with fossils he’s excavated, traded for, or purchased. This year he’s also led six digs, each involving 10 families wishing to experience archeology together.

I’ve caught PaleoJoe’s specimen-studded program in Michigan and it is stellar. That’s why I contacted him to seek tips to share with school communicators on how to make school visits easier for popular presenters.

Joe Kchodl began the interview by saying that meeting with me was a waste of his time.

“Teachers stay so focused on teaching what’s required that they don’t have time to explore resources on websites,” he grumbled. “I’ve been talking to teachers for 20 years and I can tell you, they won’t have time to read a word you write.”

I was taken aback by his demeanor. The last time I’d met PaleoJoe, he was exuberant. (Of course, he was also awarding “the ultimate field trip” to a sixth-grade class to dig dinosaur bones in Wyoming and video cameras were rolling.) 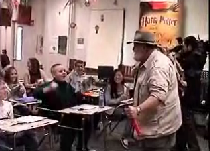 Knowing people think like they do for a reason, I asked Joe to explain himself.

He said it’s difficult to get educators’ attention, even when you’re offering a reasonably priced product that’s educational and entertaining.

[pullquote]Because of high-stakes testing and the economic recession, PaleoJoe said most schools don’t have the time, money or inclination for “enrichment,” even for a program like his that is tailored to hit curricular benchmarks.[/pullquote]

PaleoJoe estimates that 95 percent of his direct mail pieces are tossed in the trash by office staff before being seen by the principals to whom they’re addressed. 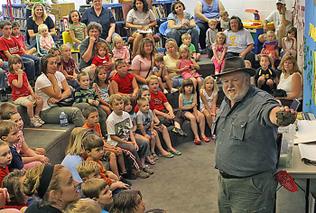 PaleoJoe does more than 100 public appearances per year, about half of which are at schools.

Local TV, radio and newspaper stories are good ways to market school assemblies, he said. The best way is a good word swapped school to school.

PaleoJoe – a retired Army man who has a bachelor’s degree in education and a lifelong interest in collecting fossils – said a greater percentage of his school visits each year are to Montessori schools, charter academies, parochial schools and science magnet schools. Gung ho parent groups at specialty schools often raise the money that buys the program, he said.

Too bad for schools that aren’t rolling in dough or parent involvement (i.e. most schools).  PaleoJoe says chances are good that students in those schools will only get what will be tested.

How much “ed” do assemblies add?

Joe’s prediction that SCN will fail isn’t what bothered me most about what he had to say.

Looking back (way back) at my own K-12 years, the assemblies and special programs are what I remember most vividly.

I was held spellbound by the Mr. Wizard-like chemist who concocted a dozen potions to steam or froth. The symphony’s petite concert and “petting zoo” inspired me to play violin in the school orchestra. (I never got very good but that experience is the reason I appreciate classical music today. ) The school assembly featuring an artist who painted a mural to music is an indelible memory of elegance and grace.

The most popular assembly was a hypnotist’s annual visit to the high school, where he entranced student volunteers who uttered hilarious things into a microphone, like, “My belly button is missing! Notify the Naval Reserve!” Students never skipped that assembly to go smoke, and the event always got a two-page spread in the yearbook.

Now that I’m older, I marvel that a program like that with almost zero educational value managed to penetrate schools at all. These days, I bet the only bookings the hypnotist is getting are parent-planned after-graduation parties.

I’ve also witnessed “suitcase syndrome.” A high school band director used to have money to hire a non-Dan Akroyd member of the Blues Brothers (yes, it was a real group) to come play with his jazz ensemble for two or three days each spring. The students worked like crazy. The professional musician could get the group playing better than they had all year. 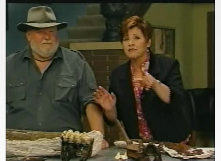 Change has been blowin’ in the wind for quite some time

I witnessed changes in the frequency and nature of school assemblies and special programs during my career as an education reporter.

In the early 1990s, it was common to hear from “eagle” educators seeking press coverage of guest speakers and daylong activities that simulated the lives of American Indians, Pilgrims and pioneers. Once I covered the story of a high school English teacher teaching Chaucer’s Canterbury Tales by casting students as the band of pilgrims in storytelling competition that unfolded along cross country running trails in back of the school. All eighth-graders in one district I covered entered the National History Day competition with jaw-dropping projects like scale models of Fort Michilimackinac, working stockades and hand-sewn quilts.

After the turn of the century, I rarely heard of such school-wide activities, except at small charter or private schools. A local arts organization that had been providing special music performances to schools in March for 25 years dropped their festival because they were finding it too difficult to get into schools.

No teacher told me an emphasis on standardized tests was to blame. Nobody complained that creativity was bleeding out of the profession. They just said they no longer have time.

It’s hard to change a narrow focus, even when you want to

If it seems like students today might be missing something special by schools’ nose-to-the-grindstone focus, what could be done to change that? 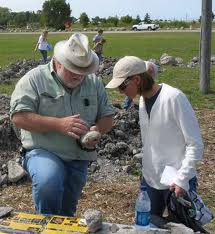 PaleoJoe on a fossils dig near Alpena, Mich.

“Nothing,” PaleoJoe said. “That would be fighting an uphill battle. It’s out of teachers’ control and it’s not going to happen. Forget it.”