Everybody interprets events and situations differently.

Imagine that your school choir is performing on “Good Morning America,” backing up singer Jennifer Hudson at the Super Bowl, and singing at the Grammy Awards. That’s as close as it gets to school communicator heaven!

Well, not so fast. Some people are grumbling that high profile appearances of a 21-student choir from Newtown, Conn., exploit the memories of the 21 students and five adults who were gunned in the horrific December 2012 massacre at Sandy Hook Elementary School.

And snide comments are percolating that only some of the choir members are actually students at Sandy Hook, and that choir director Sabrina Post (who hasn’t taught for school district in years) runs a for-profit business teaching singing and dancing lessons and might indirectly profit from downloads of the choir’s single “Somewhere, Over the Rainbow” from Amazon and iTunes.

For me, the Sandy Hook choir’s performance of “America the Beautiful” with Jennifer Hudson was the pinnacle in the Super Bowl spectacle on TV — better than Budweiser’s Clydesdale-finds-his-trainer commercial. Knowing that Hudson’s mother, brother and nephew were fatally shot in 2008 made pairing her with this choir for this song very powerful for me.

It’s a shame that even a slam-dunk of a sweet story can pull detractors out of the woodwork. Count on it. Just don’t let griping cloud the big picture of your good story.

Hearing attacks on Sabrina Post on CNN made me remember a hard-to-report student choir story from my career as a newspaper reporter. 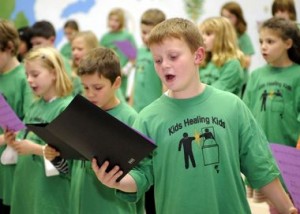 A vocal music teacher from one of the school districts on my beat formed a volunteer choir that made music videos of themselves performing uplifting songs like “True Colors,” “Accentuate the Positive” and “Will You Be There?”  The tapes were provided to area oncology clinics to give cancer patients something encouraging to view while they were getting chemotherapy.

I’d written news stories out of this choir’s early rehearsals, and the filming of their first music video, but I was geeked to do a third story when I learned that they were going to perform live for pediatric cancer patients at a summer camp. Finally, these fourth- and fifth-graders would be meeting the kids they were striving to encourage on with their videos!

I got this breaking news “scoop” because my daughter Whitney was in the choir. (It’s nice when your source lives under your roof.)

My plans for a touching story of local kids showing compassion were almost thwarted when the director of the summer camp refused to issue press credentials on grounds that media coverage might “exploit” the kids with cancer.

Not willing to take “no” for an answer, I offered a generous compromise of taking photos of the choir and identifying any pediatric cancer patients interviewed by first name only.

Forget it, she said, and slammed down the phone.

I called her again the next day to plead my case, but got nowhere.

So, I had a decision to make. Roll over and let a good story go unreported or navigate around it?

No need to shop for a disguise

“She’s going undercover as a mom,” Whitney whispered to her choir director as we boarded a school bus for the summer camp.

As one of three parents chaperoning the trip, I got my beautiful story featuring the choir. A reader wrote the editor to say how refreshing it was to read about children trying to make a difference in the community. The superintendent of that district called to tell me he got chills reading it.

I can’t imagine that the camp director didn’t see the story, or that she would call to complain if she did. I knew I could write that story without exploiting children.

To tone down, not to tone, or drop?

Some school feature stories are hard for school communicators to promote for other reasons.

For example, as a news reporter I was quietly discouraged by a school district’s public relations officer from writing a this-changes-everything story about a perennially hapless Varsity football program that, miraculously, was making a run deep into the playoffs.

The success was an anomaly, the director confided. Half the team would be graduating, the star player was moving out of the district, the head coach was moving on, and the JV team had a losing record.

Realizing it was approaching midnight and the magic would end, I wrote a Cinderella story instead.

As a freelance writer reporting about a new one-to-one iPad initiative, I stumbled over a great story about a mute sophomore who audibly asked when he’d be able to take the device home. This was an electrifying moment for the technician charged with checking off whether students had satisfied various protocols to earn the privilege of taking an iPad off-site. My reporter juices were surging as I confirmed the story with the technology director, the special education teacher, and a guidance counselor.

But I never got to write my iPad-makes-the-mute-speak story. As tickled as the educators were to finally hear the student’s voice, they thought public disclosure of his condition might be unwelcome exposure. They discouraged me from contacting his parents to request an interview.

Some good stories are burdened by bigger issues

Recently I had the joy – and the frustration – of reporting on a unique family mentoring program for male African-American students the Detroit suburb of West Bloomfield.

I interviewed Superintendent JoAnn Andrees about the two-year-old program last summer, days before she retired.

Immediately I saw it was going to be hard to write about this program, which Andrees launched because data revealed there were 100 male African-American students at the high school with grade point averages less than 2.0.

Here’s what made coverage difficult:

This story seemed worth reporting to me because it valiantly attempted to serve a unique group in a unique way.

It’s no secret that the Motor City’s population has plummeted over the last decade. Andrees told me that a lot of black inner-city families are migrating to the suburbs, or using school choice options to attend schools in ‘burbs, like her own West Bloomfield.

“It’s usually culture shock when they get here,” Andrees told me several months ago. “Schools need to build in supports to help the children catch up so they don’t fall through the cracks.”

Suburban schools typically have higher expectations for academic achievement and behavior, she explained. Even students who took honors classes at city high schools tend to struggle at West Bloomfield, where 75 percent of students take one or more Advanced Placement classes and 95 percent go on to college. Foul language and dress code infractions are never overlooked, as is sometimes the case in urban schools, she said.

To work for change at an attitudinal level, Andrees said she knew she’d have to work with parents as well as students. She made parent participation a prerequisite, which may have suppressed numbers.

I asked if she had considered enticing parents to turn out by offering catered dinners and drawings for flat screen TVs – perks I’ve seen community groups in other metropolitan areas use.

Andrees said she is morally opposed to such tactics.

“If you only had five kids at the end, was the program a success?” I asked.

Success can be measured differently, too

JoAnn Andrees
(I’m giving you two pictures of her because I HAVE NO OTHER ART!)

Andrees said she was satisfied because, after people were able to share their stories, she saw attitudes change. Several parents gained newfound respect for their son as they observed students leading book discussions, and started treating them like young men.

One student in the program earned a four-year college scholarship on the strength of his art portfolio. Another is now in college studying criminal justice.

“At first I was hearing a lot of ‘it’s everybody else’s fault’,” Andrees said. “It’s so easy to blame the teacher, the counselor, the principal, the superintendent. The student and a parent must be willing to problem-solve together on how to get better. Nothing is going to change unless a person owns himself or herself.”

What you’re reading right now would not be considered a media-ready story. There’s no art, student quotes, or future forecast. The program is over. Yet there’s rich content here about people working (in Andrees’ case, working overtime) to make a difference.

And that’s worth sharing.