It’s Thursday, so why aren’t you wearing red tennis shoes?

Northview Superintendent Mike Paskewicz smiles whenever he hears that question when he’s out and about his north Grand Rapids, Mich., community.

It’s amusing that he’s finally become a fashion plate in his 40th year as a public educator.

But the real reason the question tickles Paskewicz is that it proves people are reading his blog. He adds three to five new entries each week on the district’s website. The posts are also emailed to 450 staff members, elective officials in Kent County, and Paskewicz’s list of 500 local opinion leaders. And, he publishes links to his posts on the district’s Facebook and Twitter accounts.

The most popular posts that feature North Oakview Elementary student Travis VanSetters — the original red tennis shoes aficionado, whom Paskewicz calls “my life coach” — have been seen by upward of 2,500 readers.

That’s a pretty long reach for a guy who hasn’t fancied himself as much of a writer since being handed back his first college essay with a “C” grade and the comment “too wordy.”

“Now that I’ve been blogging for three years, it seems like a normal part of my work,” said Paskewicz, who retires in June. “I started doing it because I was upset and wanted to call out some of our elected officials. But it’s evolved into something I really enjoy.

“And I never could have anticipated the positive effect the blog would have on our school culture.”

As most school communicators know, the word blog is a truncation of the expression weblog. Blogging is the process of a writer publishing commentary in installments on the World Wide Web.

Blogging became popular in the late 1990s with the advent of web publishing tools that allow writers to post entries to the Web without having to write in computer code.

Educators usually embrace any platform for sharing ideas, but many are skeptical of blogging.

Most educators have huge workloads and are hesitant to commit to writing at least one new post per week. Some don’t sense enough internal support to freely post their opinions and observations. Federal student privacy laws also work to paralyze the pen, or at least bridle it. 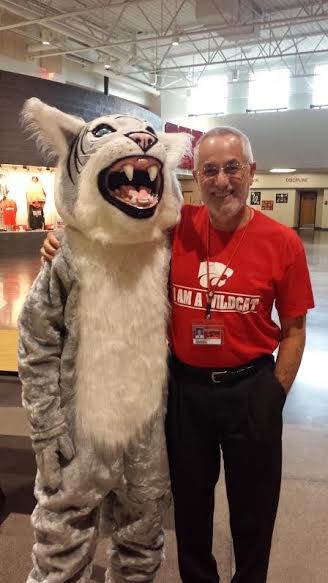 Mike Paskewicz isn’t afraid to be casual in his blog, or with Wildcat, Northview’s mascot.

In some communities, superintendents are revered like deities. Stakeholders in such places wouldn’t take kindly to a  superintendent’s musings that seemed too mundane or conversational.

“Not once has someone said ‘You’re being too familiar in the blog,’ ” Paskewicz said. “Maybe I don’t take this position as seriously as others do. The only thing I take very seriously is what we do for kids.”

Birth of a blog

Paskewicz said his motivatation to start blogging grew from disgust that elected officials routinely referred to public education as “broken.” When contacted privately, legislators would backpedal, saying they were referring only to metro Detroit schools.

But the slams, usually predicated on standardized test scores, persisted.

So, Paskewicz decided legislators needed evidence that public schools are working. He resolved to provide them with a new piece of evidence every day.

He put out a call to teachers, parents and community members to email him examples of public schools being a force for good.

The next morning, when he logged into his email, he found 55 vignettes that showed how public schools are working.

“I’ve got mail about everything from a sophomore saving a friend’s life by administering CPR to spilled milk in the lunchroom,” Paskewicz said. “So many stories weren’t getting told.”

For 1 1/2 years Paskewicz parlayed a message from his inbox into a missive titled “Everyday Evidence.” It became the foundation of his blog. He emailed to staff, elected officials and opinion leaders, and asked them to share it with their friends.

Paskewicz admits that, in the early days, he wondered if anyone was reading. Politicians were completely mum.

But then he started getting contacted by people living on the East Coast — and the West Coast — who’d read the blog. The posts must be resonating. They were getting forwarded!

Best of all, Paskewicz said his resolve to “talk about the good stuff” seemed to revirberate through the school system itself. Parents and staff seemed to be expressing appreciation more than ever. Small acts were galvanizing the community. 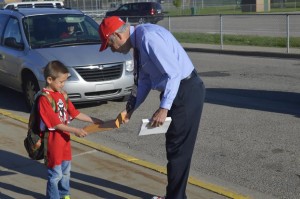 Two years ago Paskewicz started filling in part of every Thursday morning at North Oakview Elementary for Principal Teya Cotter, who wanted one leisurely morning a week at home with her young twins.

His duties include monitoring the line of cars driven by parents dropping off students. The drop-off line is where Paskewicz got to know Travis, the spunky kindergartener whose motto is “don’t forget the important stuff (i.e. wearing unforgettable red tennis shoes).”

Paskewicz began adding posts to his blog under the heading “Thursdays at North Oakview” that show what happens in elementary school from a student’s or educator’s point of view.

Readers love the writing style of those posts, which Paskewicz describes as “less provocative and edgy” than Everyday Evidence.

Before long, the district’s other two elementary schools were clamoring for Paskewicz to devote regular hours in their buildings, too, and reflect on the experience in his blog.

That’s how the weekly posts titled “Meanwhile, at East Oakview” and “World Wide Wednesdays at West Oakview” were incorporated to Paskewicz’s blog.

In blogging, Paskewicz says he’s found a way to be a voice for what’s most important in education: the relationships between staff and students, and staff and the wider community.

Posts from the elementary schools are effective because they contain qualitative data. Case studies are easily overlooked by lawmakers who put their faith in quantitative data, such as test scores, Paskewicz said.

“What it takes to improve the quality of life in a community is a commitment to the children in that community, and a deep emotional and spiritual connection to the schools in that community,” Paskewicz said. “Without that, you may have schools that get good test scores, but the community itself is not going to advance.”

While most readers mention something noncontroversial (like the red tennis shoes) when they see Paskewicz, he says he gets one or more pieces of feedback each week that encourage him to keep the pressure on elected officials.

Paskewicz believes there’s a Midwestern movement with a legislative arm that’s intent on undermining the relevance of a public education by redirecting funds to entrepreneurs posing as innovators. Charter Schools and online schools all erode support for neighborhood schools — and neighborhoods — to some degree, he said.

“They don’t educate for less money,” Paskewicz said. “They do it for the same price, with fewer costs, then pocket a profit.”