The Agents of Change Conference 2013 offered up an impressive roster of speakers, and after each session, my internal techno-anxiety lessened considerably.

Roderick Russell, the sword-swallowing first session keynoter, obviously gave a message that didn’t require me to text one of our district tech integration specialists back home for help (whew!), and I hoped that Chris Brogan would maintain the same straight-talking approach. 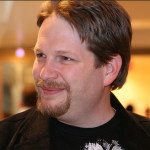 One of his most popular books for professional communicators is Trust Agents: Using the Web to Build Influence, Improve Reputation, and Earn Trust. It’s intentionally non-geeky, as he believes smart communicators won’t take action on information they don’t understand.

But stupid communicators will.

And Brogan – in a powerpoint-free 60 minutes – said that it’s critical for all of us to understand the difference between dumb and stupid.  (See… I told you this was non-geeky.)

“Every effective communicator should want to be the dumbest person in the room,” Brogan stated. “It’s the dumb people who are continually learning. It’s the stupid people who think they know it all and then cause trouble for themselves and everyone around them.”

The power of dumb.

Brogan continued, “Dumb is an advantage. Really, it is. I lost $400,000 on a project last year that I stupidly thought couldn’t miss, so I ignored several early warning signs. Dumb people are the ones who ask questions. Stupid people like to listen to themselves talk. And my stupidity in this case cost me.”

“When you learn from your mistakes, you move from stupid to dumb. Today I consider that $400,000 I spent an investment in my real-world MBA. And I challenge each of you to treat every one of your major mistakes like they’re the best education you can get.”

“Here’s what I mean when I encourage you to be dumb.”

“Choosing to be dumb will mean that you will fall in love with not knowing. You will worship at the altar of new challenges. And you will take it easy on yourself in your never-ending journey of learning.”

“I think we are all awfully hard on ourselves. We beat our own selves up horribly. Deep inside, we will call ourselves negative and hurtful names, names that we would never call anyone else.”

I anticipated Brogan would strut up to the stage and present like an arrogant big shot. I was wrong, and quickly found his “dumb is okay” message inspiring. (I’m just glad he wasn’t peddling shirts or ball caps!)

As Brogan wrapped up his prepared remarks, he opened up the Q & A with a wink, “Ask away, And yes, there is such a thing as a stupid question.”

The first question asked Brogan about the recent survey of hundreds of tech-savvy innovators, designers, and strategic planners.

“What is the most popular tool used by these individuals?” was the question.

“By far and away,” Brogan replied, “the #1 tool most highly valued by nearly everyone surveyed is PAPER.”

“Well,” inquired another audience member, “what about a system? What type of system would you recommend as the best for enhancing your personal productivity and creativity?”

“I don’t think there is just one best system out there,” Brogan said. “You need to consistently carry out the system – any system – that best works for you. There’s no silver bullet system. I’ve been battling clinical depression for some time, and my own system is nothing more than just trying to get out of bed every morning and write for 2-3 hours per day. I do this regularly and good things fall into place. I try to eat right and exercise without being a nut about it. This is what works for me.”

Like Roderick Russell, Chris Brogan was very approachable after his presentation.

So like a cat patiently watching a little hole in the baseboard. I waited until Brogan was alone.

I asked him about his high school days.

“They were awful,” he laughed. “I didn’t fit in at all. I was the perfect C student. For every A, I got an F. And for every B, I got a D. Those days were rough. Do you think they’re getting any better?”

Thanks to all of you who make up “our tribe” of school leaders, teachers, and communicators, I affirmed that the commitment in our schools to project-based learning and 21st century skills was both sincere and active.

“That’s good to know,” he said. “But can you help me with something? I know I joked about the grades I got back in school, but honestly, for my daughters who are ages 8 and 11, I have no clue what anything means on their progress reports. I’m serious. I couldn’t tell you how they are really doing in school. None of it makes sense to me. Can you explain this?”

Luckily, before I could answer, a woman came up to Brogan with a book to be autographed.

(Whew yet again!) I was rescued from demonstrating whether I was “dumb” or “stupid.” 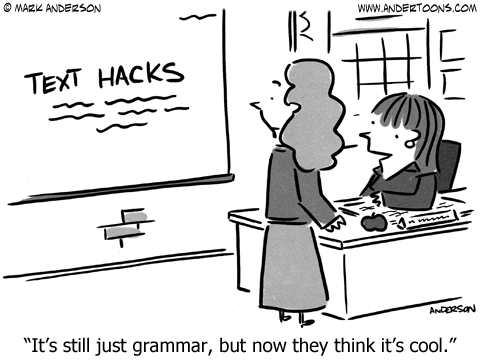