Sometimes it’s beneficial to bring up the rear.

And not be an “early adopter.”

The real winner may actually be the one who sweeps up the street after the parade has long passed by.

You may be surprised.

Sometimes even a person who arrives “late to the party” may find out the best is yet to come.

Which is fortunate in my case since I’m often “accidentally” given the wrong address on many of the party invitations I receive.

I usually have a good excuse for being late.

Commentators spoke about his gifts of leadership and oratory.

They spoke about his ability to inspire our nation to step up and do what’s right.

And they also spoke about how suffering and injustice never defeated his spirit.

All of this praise is deserved, of course.

But still I wrestled about how to honor the legacy of MLK in an email to you, a school communicator friend.

I didn’t want to merely repeat the obvious (my standard ploy…). 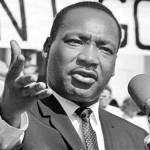 I wanted to approach the strength and character of MLK in a lesser-known way.

And I wondered about the genesis of the “I have a Dream” speech itself.

Which one of MLK’s attributes or skills gave it it’s “no turning back” vitality?

Yeah, I know school communicators are always on the lookout for the “silver bullet” or that special secret sauce that makes words and phrases inspirational and memorable, but you and I both know that MLK’s speech wasn’t grounded in an assortment of gimmicks and razzmatazz.

More than experiencing and knowing the pain of oppression —

More than his commitment to justice —.

MLK also had a keen and powerful intellect that fueled his courage.

And this amazing intellect — this amazing force for good — was sharpened in part by MLK’s stay in an Alabama jail.

Consider that MLK’s acclaimed “I have a Dream” speech was given in Washington, DC in August, 1963.

Four months earlier MLK had been arrested while protesting discrimination and unjust laws in Birmingham, Alabama.

And it was while he was behind bars that a group of prominent white clergy members issued a public letter to the media that called on MLK and African Americans to work within the system and follow the laws without confrontation and ill will.

When I read that MLK quickly penned a letter in response to the white clergy and sent it into The New York Times, I thought to myself, “I gotta see this. Talk about point and counterpoint.”

Because, probably like you, I have written lots of letters to newspaper editors, legislators, school parents, and community groups over the years, but nothing that would ever come close to something like this.

MLK’s letter, written in a Birmingham jail, promised to be a special one.

So I was shocked to learn that The New York Times refused to print it.

Luckily, after a few weeks, some smaller publications brought it to the surface.

And I only read these glorious lines for the first time last night.

“Never before have I written so long a letter. I’m afraid it is much too long to take your precious time. I can assure you that it would have been much shorter if I had been writing from a comfortable desk, but what else can one do when he is alone in a narrow jail cell, other than write long letters, think long thoughts and pray long prayers?

Here is the full letter.

Will give you a deeper understanding into all that MLK carried into his “I have a Dream” speech.

You’ll feel strangely encouraged after you take the time to read the letter from the Birmingham letter someday.