That’s what a friend thought she heard last fall as we admired an oversized sculpture of a duck-shaped pull toy at ArtPrize, a large public art competition in Grand Rapids, Mich. 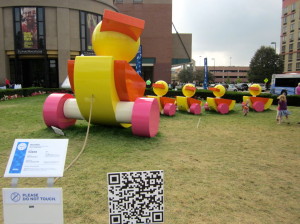 “Giant Quakers” a piece created by artists Gary Cacchione and David Seitzinger of Erie, Penn., displayed in front of the Public Museum of Grand Rapids (Mich.) during ArtPrize 2013.

Actually, the sound was made by me using an application on my smartphone to snap a picture of the QR code in front of the exhibit.

“Oh, silly me!” my friend exclaimed, seeing the “quack” was me fiddling with my phone. “I thought the duck talked!”

In a way, the QR code did allow the duck to talk. The code popped a story about how (and why) this whimsical sculpture was created to the screen of my smart phone.

This instantaneous access to the Internet and information is pretty slick. (I suppose it says something about me that I seek enlightenment in as few clicks as possible.)

By the time I returned home, would I have still been wondering about the big duck enough to fire up my computer and search the sculpture’s genesis?

That’s why I’m convinced there will be even more galaxy-like matrixes on entries when ArtPrize returns Sept. 24 to Oct. 12. It’s also why I’m pleased to see QR codes on more and more school communications.

“How does that thing work?” my friend asked me, obviously dazzled.

At the time, my answer was feeble. I didn’t know enough about the technology behind QR codes to explain it. So, I looked it up so I could share it with her, and you.

So what are they?

Quick Response (QR) codes are black-and-white barcodes that can be scanned and read in an instant with an Internet connection.

This technology (Google Goggles, NeoReader, iMatrix, Bee Tag) is pretty standard on mobile communication devices, but you can install software like QuickMark to allow the webcam on your desktop computer to read QR codes, too.

No need to fuss with alignment. The detection pattern can be read horizontally and vertically.

QR codes were developed in 1994 by Denso Wave, a division of Toyota, to track automotive components during the manufacture process.

Denso Wave wasn’t interested in profiting from the technology. Code generators and readers can be downloaded at no cost. Because the technology is free, it has spread like wildfire to government, marketing and education.

QR codes are superior to standard barcodes in the sense that their structure stores and presents significantly more data. Those postage stamp-sized matrixes can contain layers of information. 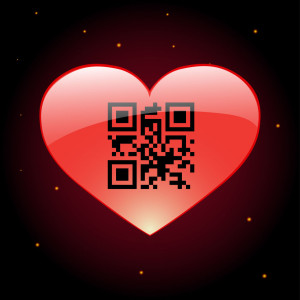 A love note, too?

Therefore, QR codes can trigger more complex maneuvers than barcodes, like nesting a URL, opening a webpage or a video, storing geo-location coordinates or making a coupon available for download.

Mobile devices are fast becoming the preferred method for accessing the Internet, but typing a web address on tiny touch keyboards is not very comfortable, even if your thumbs are lightning fast.

They allow me to imagine a day when cutting and pasting a URL into a Web browser will seem  “old school.”

Generating the codes is also becoming really easy. Popular URL shorteners like bit.ly, goo.gl and delivr all have options that allow you to create a QR code from a shortened URL.

There are several places you can create a QR code, like Kaywa QR code.

Are there hidden costs?

Decoding the data in a QR code is what costs a little money. Nevertheless, it’s not typically an additional cost to the monthly data subscription for your smart phone.

Some doubted that consumers would pay money to read what may amount to an advertisement, but people do.

The simplest QR codes contain text like addresses and phone numbers and don’t require an Internet connection. They can be decoded right on the smartphone or tablet.

Schools can use them in a variety of ways

Using a QR code as a supplement to printed material – like me getting more information on the duck sculpture as I was looking at it – is just one way to use these codes.

• Put them in newsletters or documents to give interested readers an expanded news story.

• Put one in the media center that links to student book reviews.

• Place one in the window of the computer lab to help harried students quickly access the computer help desk after hours.

• Place one outside the performing arts center that links to a video clip of recent performances.

• Need to take a vote but don’t want to count ballots? Download twittertools and you can use QR codes for a scan and vote election.

• Hang “What’s Happening At School?” posters with QR codes in the hallways. It’s the 21 Century equivalent of “morning announcements.”

Points to ponder before taking the leap

Some QR generators collect data about users before redirecting them to the desired website. Keep this is mind as you choose which service you use.

Placing QR codes on your campus also means students should be able to use their smartphones in school. Do you have policies that prevent this?

At any rate, it’s worth discussing with your team whether  to use QR codes in your school communications tactics.

With school communicators being asked to do so much today, you never know when you’ll be asked make a duck shaped mailer that can “quack.”