He was a “disruptor” of historic proportions.

Ali was a champion in nearly every arena. 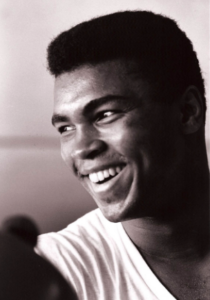 He was lightning in the boxing ring.

He captivated the media, igniting a worldwide following without the benefit of online retweets and shares.

He fought for causes he believed in and overcame all of the consequences that came along with them.

He was a celebrity of the highest order for several generations, having created a magnetic “personal brand” that was the envy of the top stars in Hollywood, Motown, Broadway, Washington DC, and the “wide, wide world of sports” (as ABC’s Howard Cosell would say).

Plus, he loved people and truly enjoyed his superhero capacity to spread joy and hope.

Some of the short videos which popped up over the weekend that showed Ali talking about his faith to crowds of all ages are astounding.

As BIG as Ali was in this world, I was moved by how gifted he was in articulating what’s even BIGGER beyond it.

Ali was also a model of resilience.
(And I’m eager to expand on this topic later this week.) 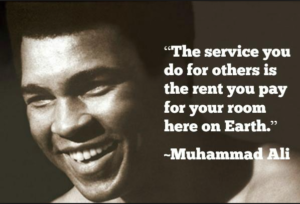 As a school communicator grounded in traditional marketing principles (perhaps like you), I’ve got to give Ali a much deserved shoutout.

From 1960-1980, while everyone else was tethered by the FOUR Ps of marketing (product, price, promotion, and place), Ali was stinging and floating both punches and poetic phrases to communicate like no one else.

As we’re now charged to incorporate today’s THREE Bs of marketing behavior (brave, bold, and bigger), I’m going to watch, look, and listen to see what I can learn from Muhammad Ali.

He had this down pat long before our Gen Y marketing gurus began tweeting about them.

Ali believed in the power of positive affirmations.

He believed in projecting an inner confidence even if he admittedly forced himself to “pretend” he was more confident than he actually was every once in awhile.

So I’ll start here as I try to learn a bit more from the life and contributions of Muhammad Ali. 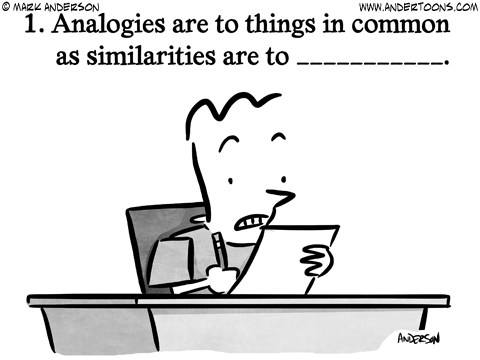