I’d like to think they were connected in some way.

My life… my attitude and general health, that is… is better because of them.

I’ve written about my Mayberry pal before.

As the Barney Fife of school communicators, I’ll always have a soft spot in my heart for his rugged handsomeness and charisma, his brave and calm demeanor in the midst of crisis, and his “no BS” approach to telling it like it is without any exaggeration or hyperbole.

At least that’s “the Barney” I see when I look into the mirror every morning while shaving.

If you’ve seen just one rerun of The Andy Griffith Show, you know that Barney’s friends and loved ones continually stepped in to bail him out of all kinds of self-inflicted predicaments.

My friends and loved ones have often done the same for me. (Don’t ask.)

This commonality aside, I also appreciated how Barney consistently overcame his nervous shakes and runaway fears to try and do good.

This was a character trait that the show’s writers took great care to develop.

I hadn’t given this any thought (the overcoming fear thing) until I heard this quote by the heroic microbiologist Dr. Jonas Salk, who died in 1995. 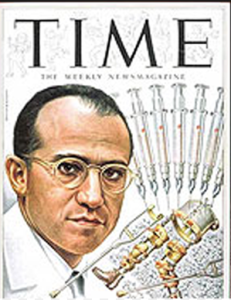 “I have had dreams and I have had nightmares, but I have conquered my nightmares because of my dreams.”

The world is better off (including many of us Baby  Boomers) because Dr. Salk didn’t allow his fears diminish his passion for science and desire to help people.

There are zero cases of polio today – and we don’t even worry about it one bit. 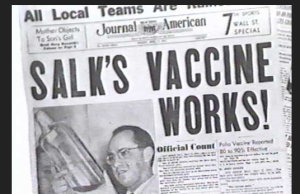 It’s hard to imagine the magnitude of what Dr. Salk meant to the fields of health research and medicine until you see an old newspaper headline like the one on the right.

It’s not often you see the media share in the joy of an achievement.

But they knew the stakes were high.

And if you want to see something else really unusual, read this Wikipedia profile of Dr. Salk.

The write-up has uplifting tone to it – for Wikipedia, no less!

I suppose I’m writing to encourage myself today… as well as you.

Barney kept a “bullet” in his shirt pocket and Dr. Salk kept a test tube and microscope within easy reach.

Each one of us probably keeps one of our favorite tools in the exact same spot, also.

But ultimately, it’s our own inner willingness to keep battling through our foibles that makes the critical difference.

Barney and Dr. Salk taught me this much.

Let’s hope MSU and U. of M. set their fears and doubts aside this weekend, too.

That would sure make it a grand one, don’tcha think? 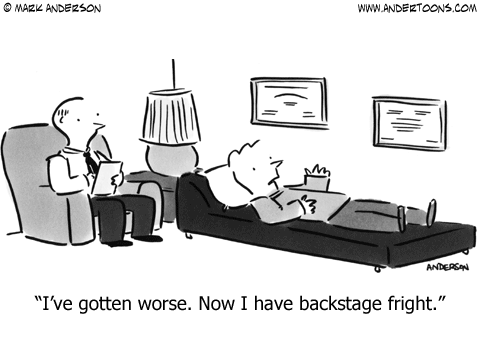