Find 30 minutes somehow in the next few days.

For the last 12 months, he has scoured thousands of hours of video on YouTube before releasing his recommendations of the Best Digital Campaigns in 2013.

He won’t get any argument from me.

These 14 short videos are tremendous.

But I nearly missed all of them due to time pressures and deadlines.

Heck! Who’s got a half hour just to sit around and watch videos?

(Oops. Apparently, I do! Forget I asked that last question.)

Anyway, what makes Gregory’s Slideshare fascinating is how he arranges his 63 slides. 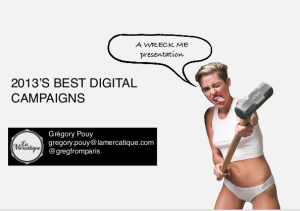 He begins with this image of Miley Cyrus.

Yikes! No wonder I was about to click right past this!

“A Wreck Me Presentation?!?” Spare me.

From the outset, he tells you that his criteria for judging was grounded in one word — relevant.

And he defines relevant as innovative, creative, and unlike anything else out there.

He then introduces each of his 14 video choices in the same way, in just 3 or 4 frames.

The first slide simply lists who made the video, the target audience, and the situation or challenge the video was intended to impact. (How often do you see this?)

The second slide simply presents the strategic concept and the results that were attained after implementation. (You don’t see this everyday, either.)

And the third slide simply gives you the video itself for you to click on.

It’s all so simple and clear – Gregory Pouy could speak at MSPRA’s March Conference to rave reviews using this slideshare presentation alone if he wanted to.

My CliffsNotes run-down of the 14 videos is below.

I’ll bet you can’t watch these two videos without making plans to loop back at a later time and take in the other 12.

Here’s the direct link to The Best Digital Campaigns of 2013.

#1  Inside a Puerto Rican Prison – bread, water, & social media!
#2  Volvo’s most viral – Ouch! I shouldn’t have tried this at home.
#3  Burger King – Spoofing those annoying YouTube ads.
#4  Oreo – Woohoo! Everyone’s favorite is 100 years-old.
#5  Milka – Uniquely packaged and personalized chocolate.
#6  Heineken – You’ll never hire people the same way again!
#7  Nivea – Sun-care products showcased on a Brazilian beach.
To describe this properly, I have to watch this a few more times.
#8  Coca Cola – Tackles the riff between India and Pakistan.
#9  True Move H – The winner of the batch in my opinion!
#10 You’re a communicator – Need a new dictionary? (Yep!)
#11 Men don’t care about their shampoo – Until now.
#12 Chewing gum is a boring product. – Uh, no. It’s not.
#13 People are there. Your store is here – Fly to them.
#14 Stephen King’s ideal coffee shop – only for the brave. 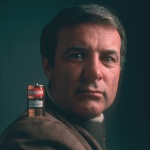 Do you remember Robert Conrad’s old
“Knock this battery off my shoulder” ad campaign?

I’m issuing you a similar dare. (About 40 years later.)

I challenge you to find the time to watch and learn from this Slideshare presentation and then let me know if I’m wrong.

Well… maybe you don’t have to write me back. (I’ve been wrong before.) 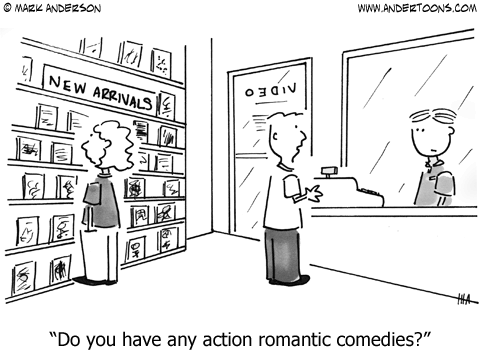