Getting the truth out on the table is next to impossible.

Every school leader and communicator know this.

This is what makes us want to believe George Washington’s “cherry tree” legend… even though historians have been expressing their doubts about it for years.

We’re grateful whenever someone “steps up” and takes responsibility for his or her actions.

It doesn’t happen all that often – without a subpoena, that is – and all of today’s emphasis for “transparency” really hasn’t changed this.

The topic of the truth (the whole truth and nothing but…) was front and center when I heard Steve Richardson on the radio last week.

Richardson is the author of “Become a Better Leader in 30 Days.”

And don’t scoff at the notion of getting better at something in one month’s time. It’s do-able.

More than once my wife has given me less than a few hours to respond to “my mess” on the kitchen table or some other chore I’ve been ignoring, so actually possessing thirty days to become better at something would be a dream come true.

Richardson is an experienced leadership coach who has directed the “turn-arounds” of businesses, non-profits, churches, departments, programs, and teams.

He notes that the initial phase of every turn-around situation must begin with a quest for the truth.

And sometimes the truth is the very last thing some of his clients want out in the open.

So, the assessment that Richardson makes right away is the commitment to “the truth.”

Clients who forthrightly wrestle with the truth from the get-go will likely reach their turn-around goals, despite the burden of other major obstacles.

Clients who side-step the truth won’t, even if their other obstacles are relatively minor.

But I had never thought about “the truth” as the single necessary ingredient in every turn-around strategy.

I’m usually hoping for some kind of secret exotic razzmatazz. (aka the magic bullet)

But now, whenever a new plan or strategy is under discussion, I see that “challenging assumptions and clarifying the truth” should the first order of business.

And these three truths about the truth are bound to make this process painful.

But at least this explains why I prefer the secret exotic razzmatazz. (Truth be told.) 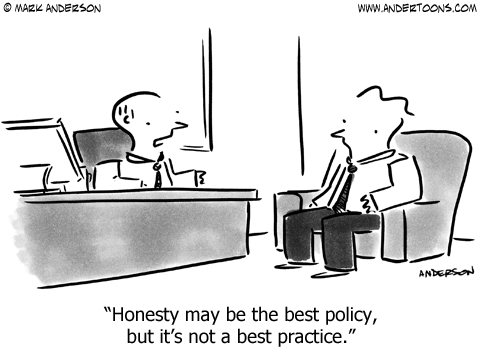