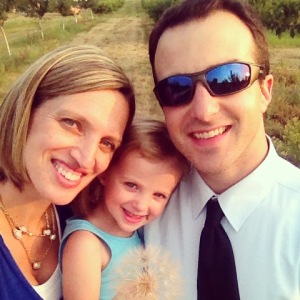 Erin Luckhardt with her husband, Jon, and their daughter, Liza.

History teacher Erin Luckhardt says she may have aspired to a career as a school communicator, but new technologies that make it quick and fun to promote schools on social media didn’t exist “back when” she was launching her career.

Dear readers, Erin is only 30.

“Social media is empowering,” Luckhardt said. “Traditional media cover the budget angle of schools, but a positive story about student learning or engagement is a 10-second blip on the radar. Social media allows us to tell our own story in a way that can be quickly shared among people with the same interest.”

Erin, who is a technology mentor at Boyne City Public Schools in Northern Michigan, creates many “Tech Tip Tuesday” tutorials on applications of interest to school communicators.

Evolution of a techie

Teaching with technology was not a major focus of her teacher preparation program at Alma College, but then again she graduated back in 2006.

“I graduated thinking that, I could make PowerPoints, so I was golden,” Erin said. “At first we were mostly dazzled by the wow factor.”

It was during her first job teaching social studies at Williamston High School that Erin began embracing technology as a way to make her classes more current, engaging and interactive.

In fact, she checked out the media center’s LCD projector – a modern-day overhead projector capable of displaying computer data – for classroom use almost every day. By her second year at Williamston, the school board purchased an LCD projector for her room.

Erin’s new husband Jon, an engineer, was laid off by a Lansing company. Her mother, Pat Fralick, director of family and community health services for the Health Department of Northwest Michigan, seized an opportunity to lure the couple to Petoskey by finding a position for Jon.

Erin was delighted to return to her hometown. (If you’ve been to Petoskey, you understand.) But there were no full-time teaching jobs to be found.

So, she started blogging.

Erin’s “Lucky in Love” blog was a smattering of her interests at the time. She and Jon had bought a foreclosure, renovated it, cooked fine meals and – before long – were decorating a nursery. Jon’s family and friends in Jackson and Ann Arbor eagerly awaited new posts, especially after baby Liza arrived.

“It was just for fun, but I was learning a new way to communicate and teach,” Erin said.

When neighboring Boyne City Public Schools, on the verge of launching a one-to-one iPad initiative, posted a position to coach teachers on how to integrate the use of technology into instruction, Erin was ready.

She created a blog to showcase the district’s technology strides. She opened a district Twitter account. She helped teachers adapt to teaching with iPads. She loved the position so much that she decided to pursue a master’s in education technology degree through Grand Valley State University.

“It was a great job but it was not a teaching contract,” Erin said. “When a job teaching eighth grade social studies opened in the district, I applied.” 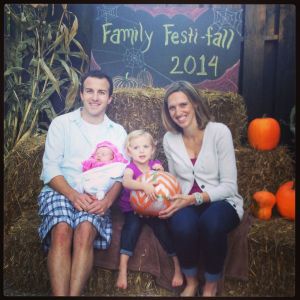 Erin and Jon Luckhardt with their 3-year-old daughter Liza and newborn daughter, Leela.

Back to the classroom

“Maybe Gavin and I couldn’t help following in Dad’s footsteps,” Erin said. “We weren’t raised in a family that flew to Florida for spring break. We had to drive so we could stop at every battlefield on the way so Dad could tell us the story.”

Now Erin is telling those same stories – but often in different ways.

She’s currently on family leave after the birth of her second daughter, Leela, but when she returns to the classroom next month she will resume tweeting a daily “what we did in class” message to parents of her students.

“Last spring I tweeted photos of an exercise in which I run an imaginary Mason-Dixon Line down the middle of my room to divide the class,” Erin said. “Students argue points from their side of the line.”

Whether you’re a teacher or a school communicator, Erin says: