Listen to ESPN and take a tax write-off. Why not?

We all know how the media gravitates to crisis, controversy, and confrontation. And where else is this better on display than in the world of sports?

Forget “the thrill of victory, the agony of defeat” platitude I grew up with. Today’s sports scene is much more complex.

Take ESPN. Despite my wife’s knocks on the door signaling me to “turn the radio down” while I’m showering and shaving in the morning, I refuse to cease developing my professional school communicator skills. “I’m only listening to Mike & Mike to build a better life for us, honey,” I always lovingly reply when I hear her gentle taps.

She must not believe me, though. She keeps knocking.

I can look up the final score of any game whenever I want online. I don’t need ESPN for that. What I love is the emotionally charged chatter from opinionated people from all walks of life. And I’d gladly stop listening if it wasn’t so essential to my job. (I just have to figure out how to sell this to the IRS … and my wife.)

Want proof? Check out the front page in last Friday’s sports section in The Detroit News or the Detroit Free Press. Better yet – just google Syracuse College Basketball Coach Jim Boeheim and ESPN reporter Andy Katz. You’ll see that these two have been sparring for about two years, ever since Katz, in an interview with Boeheim, kept the heat on a hot topic that Boeheim refused to discuss.

In short, Katz kept asking Boeheim the same question over and over while on the air in 2011. Now both men remain steadfast in their versions of what took place. Obviously, there’s more to this than I can sort out, except to sum it up for you in their own words.

“He’s crazy,” said Katz. “I only asked him about the issue four or five times.”

So on Friday’s “Mike & Mike” ESPN morning show, Andy Katz was on the air to discuss the controversy … and here’s what I found fascinating.

When Katz was asked directly why he kept peppering Boeheim with basically the same question
over and over after Boeheim said he didn’t want to talk about the issue, he said this:

“You can tell when the person you are interviewing is trying to stay on the pre-approved speaking points,” said Katz. “But sometimes your reporter’s instincts tell you that the person wants to say more. I may have gone too far with Coach Boeheim, but you’d be surprised. Many times when someone says he doesn’t want to talk anymore, I just wait for a few minutes. Often I’ll get some comments that are not on the script.”

I’m sorry if I’m the only one who never thought about this before. Even though I’ve prepared lots of district message points for my district’s communications to the media, I’ve never considered the “non verbal” aspect. It hadn’t occurred to me that the media might be looking at body language and other organizational cues to see how far they can press ahead in reporting a story.

We frequently see our message points as the end-all. Experienced reporters see them as just the beginning – if we subconsciously communicate otherwise.

Reporter Andy Katz’ comments relating to body language still have me thinking, I’ll admit. But at least they help me understand why all of the reporters I work with prefer to use email, text, or phone calls to get hold of me. The mystery is solved. Apparently, they always just accept my district’s written speaking points from a safe distance and move on because whatever extra information “my body” would reveal to them, they don’t want to know. They don’t get paid that much. End of story. 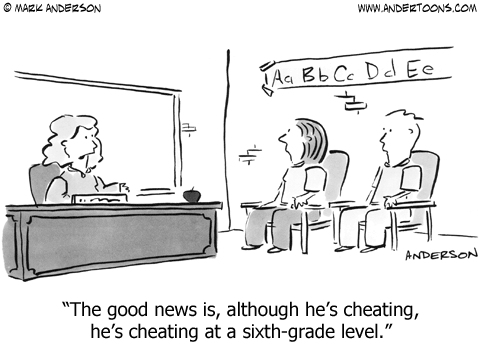