This tip comes immersed in controversy.

For more than a decade – pastors, politicians, and leaders of all stripes have referenced the same Charlie Brown comic strip. 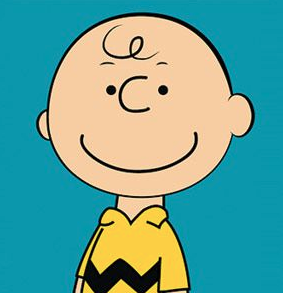 They describe how Charle Brown is shooting arrows and hits the bullseye every time.

Not that he’s a good archer.

It’s just that he shoots the arrows first – into the fence or over a fence – and draws the target around the arrows afterward, no matter where they have landed.

You can see why speakers like repeating this story.

It makes a good point.

(Probably even applicable to how our politicians draw conclusions about student test scores!)

The only problem is that this cartoon never existed.

And boy, are all the comic strip aficionados on the internet enjoying their role as “fact checkers.”

Because I had heard the Charlie Brown cartoon story in a podcast and wanted to pass it along to you with my usual flair and wit, I was glad I bumped into the truth before I did.

I was also lucky enough to discover that one of the super-fans in the comic strip forums looked through into his own extensive collection and actually found the cartoon that got this controversy rolling. 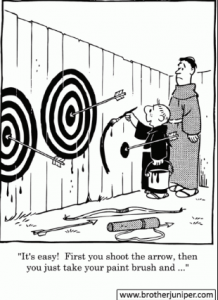 It’s old – but still worth sharing with your leadership team sometime, don’tcha think?

In fact, I might try the same thing this weekend.

Cindy has three big framed photos she’s been after me to hang up at home.

However things turn out, they can’t be worse than my prior handyman efforts.

Hope your weekend goes much better!