I’m glad no one asked me.

I can’t articulate “my dream” without first boomeranging back with, “who’s asking?”

No sense embarrassing Cindy and the girls any more than I do.

(That is, trying not to embarrass them nay more than I do since it’s so much fun and I’m so dang good at it!)

What got me thinking about big dreams – significant dreams – was MLK Day yesterday.

His famous “I Have A Dream” speech in 1963 definitely established the gold medal benchmark for all future speakers, don’tcha think?

It never fails to resonate no matter how many times we’ve heard it even though it was delivered 54 years ago.

If you read the transcript of Dr. King’s speech, it’s clear that transcendent principles and values also play a big role in its ongoing appeal.

Those are the kinds of things that live forever.
(Or so I’d like to believe!)

President John F. Kennedy also gave a number of speeches that many leadership coaches are referencing in their workshops and trainings today.

Although JFK’s dream for taking the national commitment in space exploration to new levels do not cause us to necessarily to reflect upon our transcendent principles and values like Dr. King, leadership coaches say we’d do well to model both the magnitude and specifics contained in JFK’s rhetoric.

They claim we rarely come close to dreaming big enough – and furthermore – we often avoid spelling out the specifics that would hold us accountable.

Here’s a two minute clip of JFK in 1962 that many leadership coaches use to drive this point home. 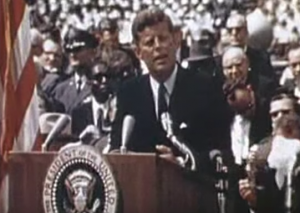 They’d say it was in speeches like this in the early 1960s that JFK spoke the words which inspired our nation all the way to the historic walk on the moon seven years later (1969).

Now if you and I were at one of the leadership trainings today, we’d likely be pressed to define and specifically answer, “What’s your moonshot?”

They don’t want to hear about how we gobbled up some low-hanging fruit.

They’d want to know if we were in the active pursuit of a big time “moonshot” dream.

Because that’s what good leaders do.

Even if they must embarrass their spouse and kids occasionally.

(Dang, I was afraid that’d be the case…)