This was my #1 gotta-have-it item when I was a kid. 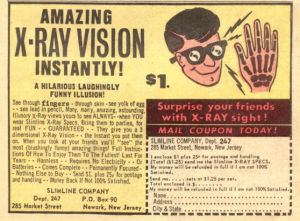 Sure, I’d request all kinds of stuff for Christmas or for my birthday.

But honestly, I only asked for things like a bike, train set, hockey stick, catcher’s glove, and my own set of keys to the family station wagon because of peer pressure.

I didn’t want my friends to think I was some kind of weirdo.

But deep within my heart, I yearned for a pair of those $1 X-Ray Specs.

Whatever problems I thought I had as a boy, I was convinced they’d all disappear once I could get my hands on those marvelous glasses.

I could see no downside.

I was already wearing glasses anyway. 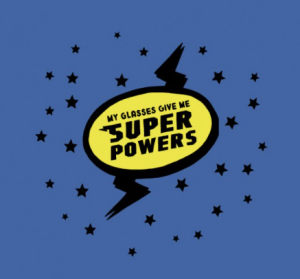 So why not wear something that could give you a super power?

Why not be able to see what other people couldn’t?

How cool would that be?

Unfortunately, my mom didn’t buy into my rationale.

She wasn’t about to throw a buck into an envelope and mail it off to a company in New Jersey on my behalf EVEN IF it would’ve established me as an “early adopter” of technology decades before anybody even knew what early adopters were.

Some visionary my mom was.

So eventually, I gave up on the dream of owning a pair of those life-changing X-ray specs when she harshly told me to “knock off” my begging for them once and for all.

(I think we had this big blow-out a few days before my 27th birthday, as I recall.) 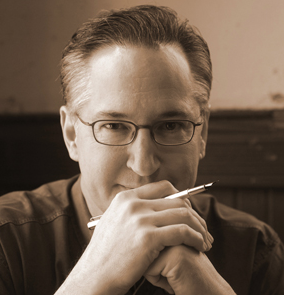 Anyway, I still think being able to see what other people can’t – or haven’t thought about – has merit.

This is why I’m so hyped that David Zach has agreed to be our next #scnLunchinar guest on Tuesday, April 12.

David is a professionally trained futurist, a much-requested keynote speaker, and his wise counsel is considered by many decision-makers to be an effective counter-weight to all of the bushels of data out there.

He knows the value of CONTEXT.

I’ve written about David before and I’m thrilled he made time in his schedule for us.

Truly, his presentation at NSPRA 2000 in San Antonio was one of the best I’ve ever heard.

You won’t want to miss the conversation we’ll have with David during the Lunchinar.

All you have to do is email and tell me to hold you a seat.

I can hardly wait until April 12th.

I’ve got kind of a personal question to ask him.

I see that he’s wearing glasses in his photo…

This causes me to wonder if… 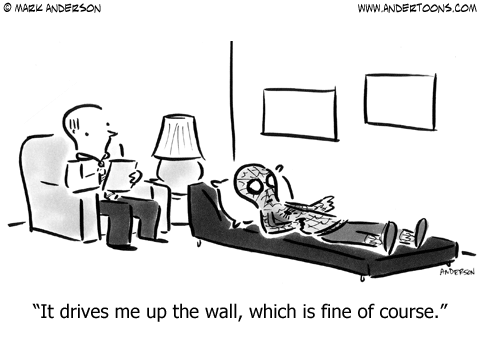